Born 1981, Tala Madani, portrays her personal and critical views on the issues of gender and power structure with a bitter but humorous perspective. ... Read full biography 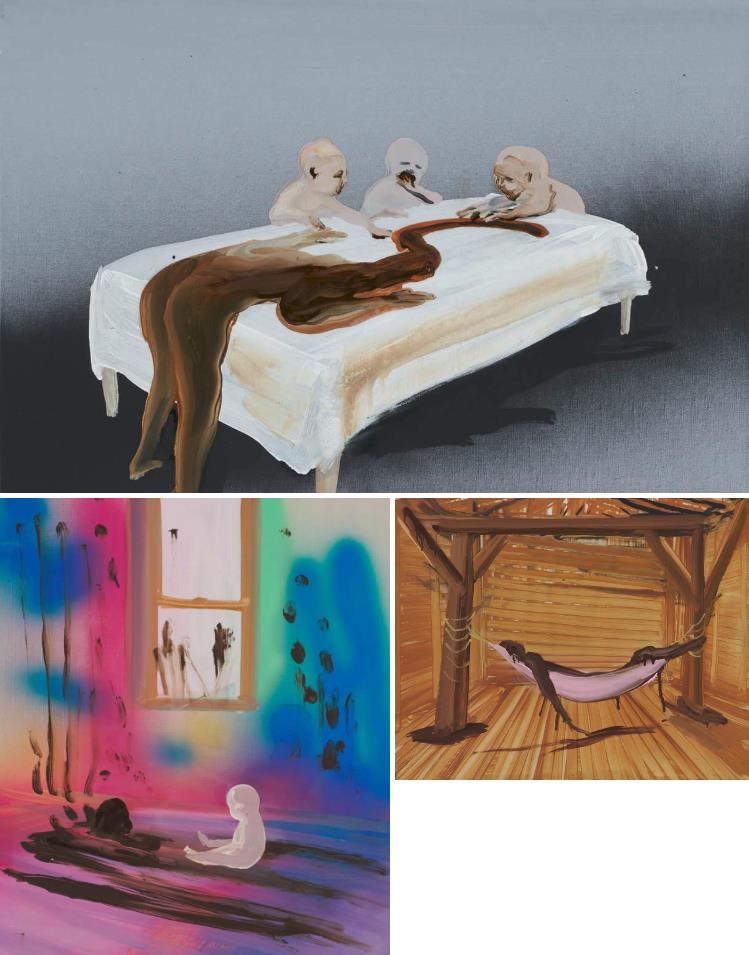 Born in 1981, Tala Madani portrays her personal and critical views on the issues of gender and power structure with a bitter but humorous perspective. Together, Madani's paintings and animations provide a broad picture of the artist's social and political critique. In Madani's works, unknown and bald men, infants with dirty hands and feet, and mothers who seem to have lost their identity and even their bodies play the main role. She pays attention to the human body and its limitations and creates unpleasant and even humorous situations to analyze the conditions created by power, violence, and even coercion.

Studying political science at Oregon State University, Madani first exhibited her works in 2003 at the "Senior Show" group exhibition at the Fairbanks Gallery of the university. Madani was only twenty-two years old when received the President's award for excellence in Art. After obtaining a bachelor's degree, she continued her studies in Fine Arts at Yale University School of Art, New Haven. In 2005, she received the "Schickle-Collingwood Prize " award from Yale University.

After obtaining her M.F.A degree, she completed her residency at the National Academy of Visual Arts in Amsterdam in 2007 and got a Kees Verwey fellowship. After passing this period in 2007, she held her first solo show entitled " Smoke and Mirrors" at Lombard-Freid Projects, New York. Her collection entitled "The Symbolic Efficiency of the Frame" was showcased at the fourth edition of the Tirana International Contemporary Art Biennial in 2009.

Madani completed her residency at the British School of Rome in 2010. The same year, she attended the Greater New York Moma PS1 group show and participated in the Liverpool Biennial. Her works were also exhibited at the 54th  Venice Biennale in 2011 by the Denmark pavilion. Madani completed her ArtPace residency and was awarded the Catherine Doctorow Prize for Contemporary Painting. Also, she participated in Venice Biennale and gained the Tiffany Foundation grant.

During the 2010s, Madani's works attracted the attention of critics and gallery owners and found their audiences. Her works have been exhibited at solo and group shows over the years, as well as in various art fairs such as the Swiss Art Basel, the Frieze London, the Miami Beach Art Basel, and the Hong Kong Art Basel. She gained the Smithsonian American Art Museum's James Dicke Contemporary Artist Prize in 2020.

Madani has been focusing on creating a collection named " Shit Moms" since 2019. She exhibited these works in different galleries such as Pilar Corrias-Eastcastle, London; The following year, the gallery showcased them at Frieze London. Also, she held another solo show named " Online Film Screening: Animations by Tala Madani" at Solomon R Guggenheim Museum, New York. Her works have been sold in different auctions around the world; such as Phillips London, Christie's London, and Sotheby's London.