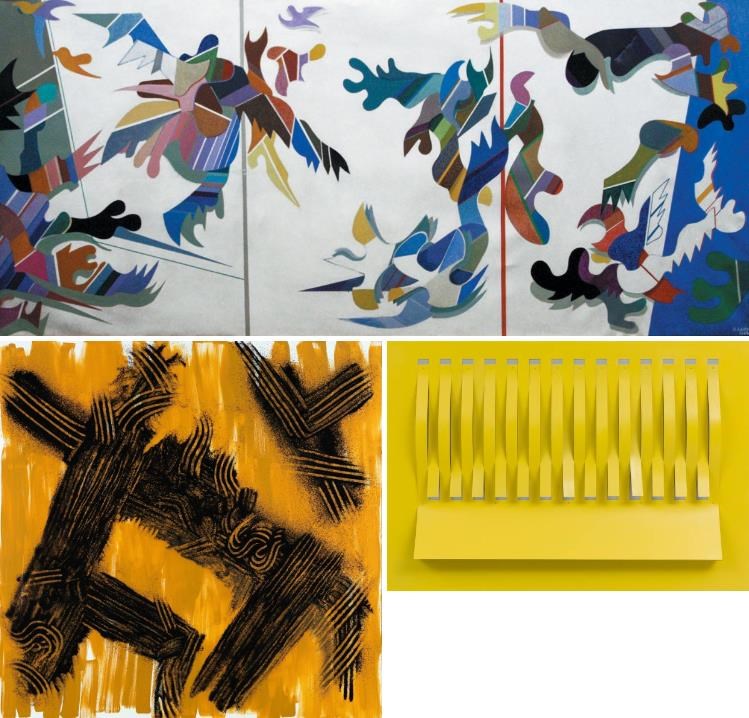 Painter, sculptor, and an Iranian avant-garde artist, Mohsen Vaziri Moghaddam (1924-2018), had a participle role in presenting the Iranian modern art at international institutions. His practice has rooted in folklore and aesthetics. His early works employed architectural patterns and traditional designs, but as he matured, his work became increasingly abstract. His manner and teaching illuminate the way for lots of artists.

He was born in 1924 in Tehran. After obtaining a diploma from the Agriculture institution in 1943, he enrolled in the Faculty of Fine Arts. While studying at the university, he got the drawing skills and depicted the portraits and landscapes according to them. He graduated as the best art student in 1948.

He had his first solo show in the Iran-America Society in 1952. In 1955 he immigrated to Rome and studied at the Accademia di Belle Arti di Roma. During this period, he was influenced by Van Gogh and created some artworks in still life and landscape. He held his first show in Italy in 1956 and showcased his figurative paintings at Galleria d'Arte Porto-Novo.

In 1957, a landmark year and turning point in his artistic career, he attended Toti Scialoja's classes at the Academy for six months and started experiencing abstract art and creating visual spaces. In 1958 he created some abstract works by using different materials and ways of applying brushstrokes. In the same year, he graduated from the Accademia di Belle Arti di Roma and also was appreciated by critics which brought him the Senta Gold Medal. In that year he created a work named "A Persian City" and participated at Rome Biennale; he got the San Vito Romano honorary degree and silver medal from the Tourism board. He also got the gold medal in the first Tehran Biennale.

Between 1959, and 1960, he developed a vision of abstract art through experiments that were highly focused on materials. This eventually lead to the creation of some of his most powerful works: The Sand Composition Series. Different types of sand were applied to the canvas in their natural state or mixed with color. He participated in Venice and Tehran Biennales in 1960 and held The Sand Composition Series which was organized by the Deutscher Bücherbund in Munich. In 1962 he won the 31th Venice biennale prize for the "Black Sand" painting.

In 1964, Vaziri was at the peak of his artistic career, marked by the purchase of one of his paintings by the Modern Art Museum (MoMA) in New York. He left Italy for a long time and returned to Iran where he taught for several years at the Faculty of Decorative Arts and the Faculty of Fine Arts in Tehran. His return to Iran and heavy teaching commitments kept Vaziri away from painting for almost three years. In 1966 his works were exhibited in a group show at MoMA.

Between 1967, and 1968, he commenced working on a series of reliefs made of aluminum and iron sheets. At this time, he was still anchored to a mono-dimensional approach. Shortly after, in 1969, the reliefs lead him to the creation of tri-dimensional works in the form of wood sculptures. From 1970, he created the next step in the evolution of still works: a series of articulated, mobile sculptures which their wood pieces were joined together by nuts and bolts so that – in Vaziri's own words – "they would open and close just like human joints". In 1971 he showcased these wood sculptures in Iran-America society and the next year at Tyler Art School, Rome. In the 1970s these sculptures inspired the creation of a series of abstract paintings. In 1975 a survey of his works from 1973 to 1974 was held at Takht-e-Jamshid gallery.

During the 1970s and 1980s, he continued the idea of these articulated sculptures in another way. He created these abstract forms, black and white, empty or full spaces with warm and cold colors on a white background of the canvas. These works have been formed from the movements of colors and dynamic shapes which their abstract, ribbed forms remind birds and monsters. Regarding his attempts to compile art books for years, he published the first volume of "Method of painting" in 1981, which remains the "bible of art" in Iran, still, the preferred text in Iranian schools reprinted over and over. He emigrated to Italy in 1985.

In 1999 his translation of W. Hartmann's "The Thought and Work of Paul Klee" was published. In 2000 he renewed his contacts with Iranian universities and participated in numerous conferences. In 2003, Vaziri was affected by an eye disease that considerably reduced his eyesight, but his verve as an artist was unaffected. He invented a new way of expressing himself: a series of acrylic paintings, where large splashes of color reflected his vision of reality.

In May 2004 one of his sculptures entitled "forms in movement" was showcased in the "Modern Iran" exhibition at Asia Society Museum, New York. He held an exhibition in Tehran near the Tehran Museum of Contemporary Art together with Gerhard Richter and on this occasion, he was recognized as the "the best  Iranian artist of the century".

During the 2000s and 2010s, Vaziri Moghaddam exhibited his works in various solo and group shows and also at different art fairs. He passed away in 2018. His autobiography entitled "Memories" was published in the same year by Nazar publication. In this book, he narrates his memories, life details, and artistic activities. Also, a solo show entitled "An overview of Mohsen Vaziri Moghaddam's Works" was held at Sotheby's London in October 2021. Another show including his sculptures and designs, entitled "Unreleased Projects" was held in November 2021, at Argo Factory with the collaboration of the Pejman foundation. After years this was the first time that all of these works were showcased together. More than 100 works of Vaziri Moghaddam from different years of his activity (1968-2018) were exhibited at this event. These works are included relief sculptures, articulate and mobile sculptures, and designs.