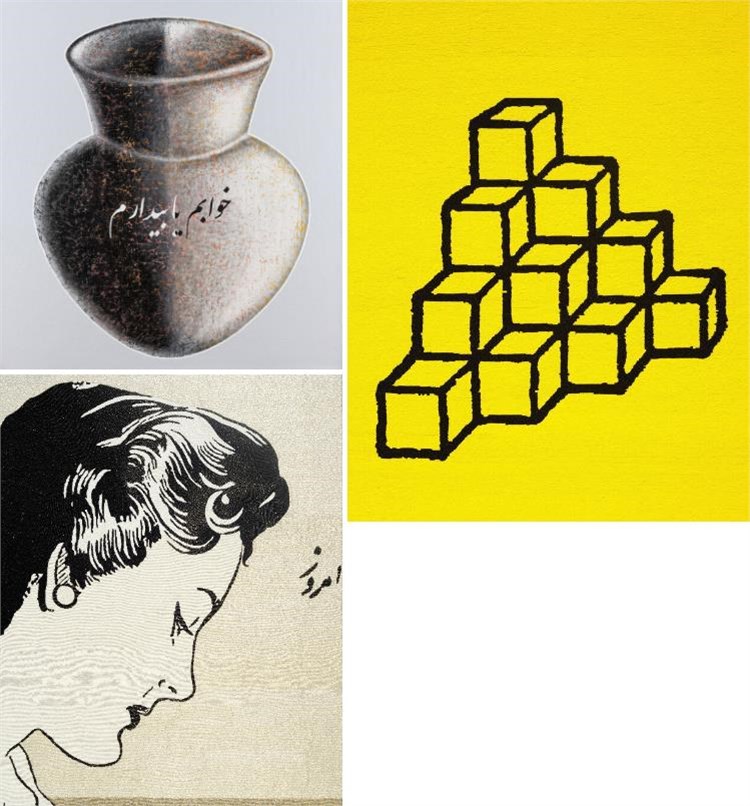 Farhad Moshiri (B. 1963) is a contemporary artist who suggests in his artworks – with a language influenced by Pop art – subjects derived from Iranian popular culture, and the West propaganda childish books and cartoons. His works are complexes of art and stereotypical elements that may be considered as hints of the cultural identity of contemporary Iran.

Farhad Moshiri was born in Shiraz, Iran. His father was the owner of multiple cinemas in the city, so he became familiar with American films and cartoons and developed an interest in cinema and modern art of the West. He moved to the United States when he was young, attended California Institute of the Arts from which he graduated in fine arts in 1984. His artworks are mostly consisting of paintings, sculptures, and combinations of objects and materials from everyday life. He also created a calligraphy collection of numbers during the 2000’s.

By suggesting stereotypes of the society, Moshiri's works present a kind of irony; but they may be equally considered critical. By this special expression, he seems to aim at showing the culture gap in Iranian west-influenced society, while also blurring the contradictions between them.

Moshiri moved back to Iran in 1989 and attended Tehran Biennale in 1993. His "Jar" series was exhibited later in 2000 on Vanak street at 13 gallery whose owner was Fereydoun Ave.

Moshiri's artworks have been presented over the years in many solo and group shows, biennales, and art fairs. His "Secret Garden" was sold for one million dollars at Christie's auction house in Dubai in 2013. Also his paintings "Only You" and "Am I Dreaming or Am I Awake" from Jar series were sold at 8th and 12th Tehran auction.

Solo exhibitions "Go West" at the Andy Warhol Museum in Pennsylvania in 2018 and "Float" at Perrotin Gallery New York in 2014 were among the most important of his shows. Moshiri's works were also exhibited at Iran's pavilion of Venice Biennale 2015. In the recent years, his works have been presented in multiple group exhibitions, among them "I Will See It, When I Believe It", "There is Fiction in the Space"  and "Rebel, Jester, Mystic, Poet: Contemporary Persians" by Perrotin gallery at Asia Society museum of New York and Art Paris in 2020, and by the Third Line gallery at Art Basel, FIAC, and Art Dubai in 2019.