Behrang Samadzadegan depicts Iran's political, social and historical contemporary changes combined with either imaginary, religious and mythical narratives, or world's art masterpieces, by collaging a chaotic, yet coherent set of subjects through the use of a wide range of artistic media. He has arranged several solo and group exhibitions in Iran and around the world and has achieved multiple international awards.

Through introducing his vision and attitude, the statement of Samadzadegan's show at Mohsen Gallery called "Heading Utopia, Chapter 2: The Spring That Never Came"  helps us understand his artworks:

"Images claim to be versions of the truth. Yet, "the truth is singular, and its versions are mistruth." How would images represent the experienced history that includes wisdom and ignorance? Also, how a virtual image could become the man's quest to attain Utopia? To achieve this virtual ideal, how man responds to the experience of existence heavily loaded by memories? How we handle the dichotomy between the present and the past? And how we tackle the losses that are inevitable results of that distance?"

"Utopia" [with all its different names and senses], Armanshahr, Madine-ye-Fazeleh, Nakoja Abad, the ideal society, or the earthly heaven, is a symbol of human's desire to achieve eternal happiness and justice, a proper alternative for their current situation, and to revolutionize current social roles. This imaginary heaven is searched sometimes in the past mythical age, fables, and honorable national narratives, and sometimes in a promised future. The residents of this imaginary land live free of any worries being busy with their own business. Discrimination between different social classes, races, and religions is no longer a valid concept, and a permanent order rules over the foundations of this land; "there is no sign of snow, blizzard, and hail" in its green gardens. However, humans living in the 21st century find it not only hard but also impossible to achieve such an alternative. Today, while there is no sign of utopia, we see myriads of dystopias and horrible, disappointing stories caused by human advancements in different fields, such as wars, hostile powers, totalitarian governments, and the destruction of nature and individual personalities.

Living in the current world, modern humans inductively know from experience that the attempt to achieve utopia with all its norms, values, and laws will constantly meet with failure. This failure is represented as a non-stop snowing. With his artworks, Behrang Samadzadegan questions any forced legitimacy, the order of the dominant discourse, and even the ability of images in challenging this artificial order. In his statement, Samadzadegan states that throughout the continuous project of "Heading Utopia"  he keeps tracking humans'  failure in the conditions they made themselves and attached to; that is trusting in romantic hopes, or hopes for political and social changes, or even trusting in art as a context for the freedom and rightness of truth. That is why in his narrative canvases, spring is covered in snow, and time and space are twisted in the conflicting engagements in various dualities, such as the present and the past, imagination and reality, history and myth, good and evil, spring and winter; an everlasting winter which symbolically conceals the green background, characters from myths and history, and also the artist's imagination behind its white flakes.

By referring to the famous characters of history and literature, Samadzadegan creates collages in most of the paintings of this project, in which the ancient heroes of Persian literature, such as Layla and Majnun, and Khosrow and Shirin, are depicted next to Kafka and Benjamin. This is a puzzle which is sometimes filled with masterpieces of art history, and sometimes with contemporary figures in or out of Iran's geographic coordinates. This suggests that the artist's utopia is where the normal continuum of time and space is disrupted, in which there is no sequentially progressive event, and all the elements within the narrative are somehow connected to each other by snowflakes covering the scene. By representing the city as a context for the happening events, the artist refers to the Persian mythical utopia. In Persian utopia, the city is situated closer to the sacred sky because of the platforms, and the checkered pattern is a symbol of the heavenly order. The temple is representing the compact structure of the cosmos, and the quadrangle symbolizes its four main directions. However, in the artist's flow of thoughts, this mythical order is combined with the modern world and revolutionized its meaning. This city is a utopia, the people of which do not represent a coherent historical narrative, because under the influence of a visible or invisible hegemony, history's picture is depicted on its pages; this is an unordered, incoherent narrative tied to our contemporariness, and social and political events, which with the title of the exhibition, indicates that throughout the history, attempting to achieve the spring of utopia, has met with failure due to sudden snowfall.

We join the artist's thoughts in "Accompanying Shirin on Her Way to Perish, after Nezami Ganjavi", and its accompanying image description. In a landscape frame, a certain location in a busy city is pictured, in which human characters are gathered in the foreground trying to do something unclear. Six individuals are standing on the left-hand side, with their hands in their pockets. They are wearing something that covers them from their head to the shoulders while facing someone in the background who has the same appearance but seems to be giving a sermon. The way these people are dressed reminds the viewer of historical events. They are standing in an area divided into a checkered pattern by horizontal pieces of wood. In the middle of the image and next to the six individuals, there is a man with a beardy face standing against a plane with a linear pattern, behind which his image seems to be duplicated. A huge, dark-skinned snake, with patterns of colored circles, has twisted itself around a rod in the background, linking the upper half of the image to the mythical, underground world of snake-like gods related to the Mesopotamia region, while at the same time may refer to the snake that deceived Adam in the Garden of Eden. The snake's body starts somewhere on the right-hand side of the painting, hidden in an enormous building, and ends up on the left-hand side behind the head of one of the six individuals, marked with blood. A green jungle is visible in the mythical world of the painting, on the corner of which there are three gates settled in a stair-like arrangement. In addition to the snow, there are red petals raining like sharp spears all over the scene; on the people. Looking closely at the sequential arrangement of the elements, one figures that the snowflakes and petals are conveying meanings other than their physical appearance.

Intertextual references are visible on the right side of the image in a hierarchical arrangement. In the first row, there are two soldiers holding guns and wearing helmets with the mark of a red pentagram on them, which is the symbol of the world's proletariats uniting with the army of the Soviet Union under the leadership of the communist party. In front of the soldiers, there are three characters; one sitting on his knees, the other one, who is dressed like a clown, is sitting on a chair while pointing to the person that is giving a speech in the background, and the third one seems to be hiding from something which is happening there. Closer to the foreground, a head, standing on fingers while wearing a glove as a hat, refers to a mythical space and time, and visually nudges the viewers so as to interrupt their purely historical understanding of the painting's narrative. In the next row, a welder wearing a special helmet, which lets him connect to the world only through its viewing area, is welding a series of fences in order to separate the main characters in the foreground from the background characters; these are women in black veils and men with beardy faces, standing near a concrete building and watching the event happening in the foreground. However, the snowflakes and red petals rain all over the scene and on everyone. Despite the historical references and the obvious presence of symbols, such as jungle, snowflakes, red petals, a red army, and human figures doing some apparently revolutionary act, the painting cannot be reductively read as a historical narrative with a single specific meaning. Rather, the artist has linked his mental image of a historical event with art,  a period of mythical past,  cultural identity,  politics, and his concerns, thus providing a range of interpretations, as vast as it is allowed by the variety of intertextuality within the minds of the viewers.

Photographs of the show installation: Courtesy of  Mohsen Gallery. 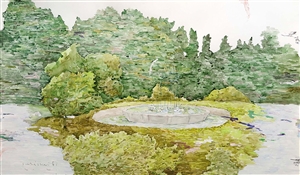 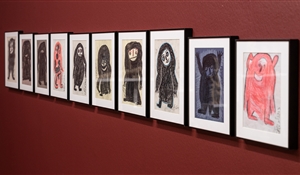 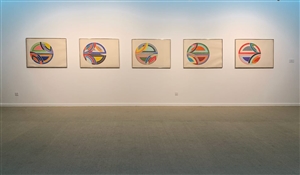