Nazgol Ansarinia's solo show titled "Lakes Drying, Tides Rising" was hosted by Green Art Gallery in Dubai from March 8 to May 7, 2022. The exhibition focused on Ansarinia's recent works centered on issues related to water and architecture.

Nazgol Ansarinia (b. 1979, Tehran) received his Diploma in Art & Design from Chelsea College of Art & Design at the University of the Arts, London. She graduated with a B.A. degree in graphic and media design from the London College of Communication at the University of the Arts, London. She received her M.F.A. from California College of the Arts (CCA), San Francisco. Ansarinia is a world-renowned figure in Iran's contemporary art and has exhibited her works in several group and solo shows in and out of Iran. "Don't Express Your Opinion" at Ave Gallery, "Drawn from Life" at Abbot Hall Gallery, and "Pools and Voids" at Galleria Raffaella Cortese in Milan are among many other group and solo shows that displayed her works at different locations around the globe. Ansarinia's artworks have also been presented at important biennales and auctions, such as the Venice Biennale and the Istanbul Biennale. "The Room Becomes a Street" was the title of her 2019 exhibition at Argo Factory, where she displayed a vast collection of her works.

Ansarinia's works are mainly based on architecture, and interior and exterior spaces. They focus on the construction, destruction, and deterioration of historical buildings and urban structures. She uses elements of traditional art and historical architecture and combines them in a unique language to achieve a new concept, thus presenting new possibilities residing between the past and the modern structures of life. With a background in art, design, and theoretical and aesthetic concepts, she considers indigenous architecture styles within the environment in which they are constructed.

The "Lakes Drying, Tides Rising" exhibition, addressing Iran's water scarcity crisis, is a result of yet another collaboration between Ansarian and the Green Art Gallery. By choosing the fountain as a key element in Iranian architecture, the artist seeks to propound subjects related to "Lakes Drying." Iranian houses and gardens traditionally used a shallow pool for dampening the dry atmosphere and regular household chores like washing or simply for its beauty. During the 1960s, swimming pools were added to the houses' architecture. However, looking at Tehran from above revealed a strange phenomenon; the pools in rich regions of the city had remained empty. In this city-dependent experience, Ansarinia conducts an investigation centered on the pool element in Tehran's urban space. Starting with a municipality map, she discovered 1100 pools in the Jordan district of Tehran, collectively occupying an area of about 5000 square meters. The recent water scarcity in Iran and the whole region caused these pools to remain empty and useless. Nonetheless, they have rarely been repurposed, bringing up the subject of Tehran's high population density.

In the exhibition's statement, these empty spaces have been interpreted as "memory containers," waiting for an absent future that may never come true. Ansarinia's works are mainly observational and technical, presenting insight into urgent issues regarding today's cities and their residents. The "Lakes Drying, Tides Rising" exhibition also follows the same path and combines a serious problem with a vision that begins to form in detail, then encompasses everywhere.

Ansarinia's sculptures, videos, paintings, and drawings in this show include empty pools built in different shapes and sizes and maps designed based on the original municipality maps with blue and brown paints applied to them. The collection of pool sculptures displays five or six pools attached together, the dimensions of which are reproduced exactly as recorded in official maps. The video simultaneously shows the empty space of a pool and the blue wall of a room where the artist used to play football during her childhood. The color fades away and develops cracks reminiscent of the estuary of a torrential field, rapidly disappearing into the sea, thus saturating the blue again. In the second video, a macro view of the same process is displayed, but the video is manipulated to resemble the waves of a water flow. The darker spots appear as molds or oil leaks.

In this show, Ansarinia understands the empty pools as remains of old wounds. The blue depressions play another role this time; they become witnesses and attempt to shout; they announce their presence through their uselessness. In other words, they become problematic when they become useless. They demand an absent matter that has emerged from the collective mind.

The "Lakes Drying, Tides Rising" exhibition extracts a universal issue from the empty pools of houses in Tehran's northern regions; an epidemic crisis, slowly revealing its different aspects and leaving unhealable wounds behind. 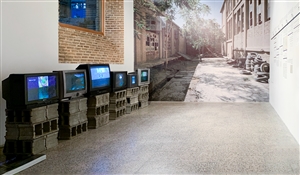 "Immediate and Remote" at Aaran Projects 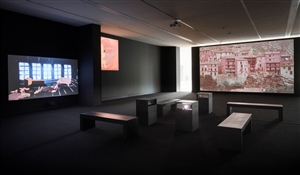 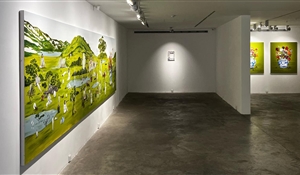