Translated to English by Soheila Habibi

Bavan Gallery hosts a show by Mahsa Tehrani (b.1983) in August and September 2022 entitled "The Hunting Ground". In this show, a collection of oil paintings on canvases of different dimensions, single or polyptych, is presented. This is Mahsa Tehrani's second solo show at Bavan Gallery after the show "Memories of Ocean Swim Meets".

Due to their space creation and style, the works of "The Hunting Ground" corresponds with Mahsa Tehrani's previous works and are considered as a part of her mental world. Men, their lived experiences and the social and political connections involved in people's lives have always played an important role in the formation of this artist's works. In most of the paintings, the human figure is seen in the middle of an imaginary world, being busy with various actions. In some of the works of "The Hunting Ground" the flowerpot has appeared as the main subject; in her statement, Mahsa Tehrani gives this element a human identity and invites the audience to take a deep look at the contradictions of human life.

The show includes thirteen relatively large paintings. Upon entering the exhibition space, we encounter the largest panel in the collection; a triptych image of a vast and endless nature in which humans and animals can be seen scattered and sometimes in connection with each other. Displaying this great work in the audience's first encounter with the paintings acts as a general introduction to the narrative told by the artist. As we go on and pass through the other works, we gradually see the elements more detailed and from a closer look. After a general exploration of this spacious nature, Mahsa Tehrani's flowerpots are placed before the eyes of the audience in large dimensions and invite them to take a deeper look in the second part of the exhibition.

The use of green color as a common background for all of the works has unified the environment in the exhibition space which surrounds the viewers; as if they can enter the work and find themselves as a part of the depicted world in the paintings. This space is also related to the previous collection of the artist and makes sense in its continuation. The exhibition of works continues on the second floor of the gallery. In this part, the artist draws the audience's attention to flying birds, their confrontation with dead birds, and their images on flowerpots.

The elements and characters in Mahsa Tehrani's paintings, although depicted as realistic and performing seemingly simple activities, look surreal in combination with each other and the space in which they are located. By putting together simple objects, the artist creates an imaginative picture that narrates relationships, contradictions, and complex concepts.

Expressiveness in Mahsa Tehrani's works is done in a symbolic way by using personal symbols, involving the audience's imagination. Therefore, she can be considered as a symbolist artist with expressive works who has redefined her content frameworks and standards; it means that her paintings are neither completely representational nor Surrealistic, but at the same time the characteristics of both can be attributed to them.

Looking closely at Mahsa Tehrani's dynamic landscapes, one of the points that attracts attention is the juxtaposition of living and dead animals. This contradiction is followed in another way in flowerpots; works that at first glance show the freshness and beauty of a flower in a colorful vase, but in fact, they can be seen as an image of flowers picked from nature that are about to die. In this way, the artist has presented concepts such as life and death and the contradiction between these two with a symbolic view.

In the statement of this show, Mahsa Tehrani has considered dealing with contradictions and the instability of everything in life as the inspiration for the creation of "The Hunting Ground" collection. On the other hand, the title of the show has a reference to the artist's view about the role of man in the world. She stated that "looking back at the vague and blurry images of the past, the ambiguous future ahead, and the influence of bounds of geography and locations, I see humans in the stretch between birth and death as both the hunter and the prey." And in this way, it induces the audience an aspect of the juxtaposition of life and death, the hunted and hunter, and softness and violence. 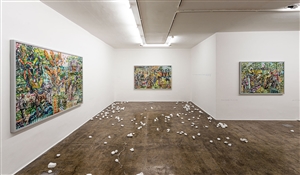