An exhibition of works by Tala Madani is currently running at KM21 gallery. It started on May 14, 2022, and will continue until August 21. Supervised by Yasmijn Jarram, the exhibition is Tala Madani's first solo show in the Netherlands, presenting paintings, animations, women portraits, babies inside the mother's uterus, ceiling fans, and shadows waiting for an ominous event in a grotesque space. Tala Madani, a Los Angeles-based artist, born in Tehran, depicts her beliefs about political and social issues using unidentified characters wandering in comical but unpleasant situations. In her satirical paintings, Madani displays subjects associated with cultural conflicts such as man and woman, western and non-western, and creation and destruction.

Men, infants, wandering mothers, shadows waiting for a grim happening, and threatening fans are the primary elements used in Madani's works. Looking at the works in the show, a feeling of danger and the possibility of a sudden and imminent occurrence comes to mind. A huge painting with pastel colors shows a gigantic baby holding a loaded gun inside the uterus, while multiple holes on the uterine wall, as windows for passing light, indicate that several bullets have been fired. In another painting, a baby is modestly kneeling with his back to the viewer, while an open window at the front reveals its relationship with another creature in a space suit, a relationship indicative of some kind of collusion between the inner and the outer world.

In multiple tableaus, the sharp blades of a ceiling fan are depicted in different shapes and colors, like a deadly knife above the head, emphasizing the hidden and often unseen dangers of our world. Looking at the ceiling fan titled "Death Fan" with a torn rope on its blades disturbs the viewer's peace of mind, reminding them of its symbolic presence in the introduction of the movie "Apocalypse Now," a masterpiece by Francis Ford Coppola. (1)

Besides the paintings presented in the "Death Fan" show, some animations with critical subjects are being played. One of them starts with a man entering the stage and choosing a box containing a brochure with instructions for building a chair. While turning the pages, he faces a warning page that suddenly transforms him into a chair made of flesh, leaving him no time to react. (2) This may symbolically refer to the unnoticed effect of the media on people.

In other videos screened at the show, women play especially the role of a mother. Using feminine figures, Tala Madani has investigated what forms the actual character of a mother. In Iran's social, historical, and artistic context, the ideal mother with a child is specified with specific images. Throughout the history of painting, we are used to seeing sacred images of infants and mothers, assigning mothers a role that contradicts how they are portrayed in Madani's paintings: a mother depicted in a brown figure referring to feces. By getting distanced from the stereotypical image of complete mothers, she presents an alternative image: "Shit Mom," made of misery and feces.

"Concrete Suicide" (2022) is the title of another series in this show presenting multiple frames of terrifying suicide scenes: the silhouette of an unknown figure standing on the edge of the rooftop, the shadow of someone jumping off a building, and a blood stain on a curtain suggesting the execution of an unfortunate decision. The scene is always the same in these images, but the changes in shadows seem to indicate different times of the day.

Tala Madani has attended several biennales, group and solo shows in the US, France, Japan, Austria, Netherlands, Italy, and England. She has also won various awards, including the "President's award for excellence in Art" from the Oregon State University (2003), the Schickle-Collingwood Prize from Yale University (2005), the "Catherine Doctorow Prize for Contemporary Painting" (2013), and the Smithsonian American Art Museum's "James Dicke Contemporary Artist Prize" (2020). Her artworks are also preserved in important collections such as the Museum of Contemporary Art (MoCA), the Museum of Modern Art (MoMA), the Stedelijk Museum in Amsterdam, the Tate Modern in London, the Guggenheim Museum in New York, the Mori Art Museum in Tokyo, and the Whitney Museum of American Art in New York. Additionally, her works have been sold at different auction houses around the world, such as Sotheby's, Christie's, and Phillips.

Footnotes:
1. In this war movie, the sound of the ceiling fan is replaced by the sound of a helicopter's blades, while the image of a forest in fire leads to an extreme close-up shot of a gun and Willard's reversed face next to which the fan is rotating. 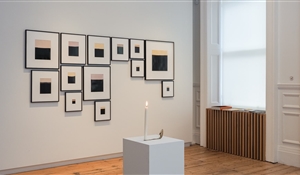 "8 Minutes Ago": A Review of Hessam Samavatian's Show