A series of paintings by Nasser Bakhshi was displayed from April 21 to June 9, 2022, at Pedrami Gallery in Belgium. The show, titled "Unfinished Flight," was an attempt to redefine collective memory. The exhibition's statement referred to instances of events that remind each individual of their personal time and life periods. The presented pieces are full of signs and images that merge into each other at any moment and form a narrative within themselves.

Nasser Bakhshi (b. 1982, Tabriz) is a self-taught artist known for his narratives of collective memories as a repetitive element in his works. These are paintings with fine details rendered inside metal or wooden boxes which carry parts of their creator's soul. The "Unfinished Flight" show was presented in a corridor-like space at Pedrami Gallery. Two paintings are installed on black backgrounds on two opposite walls. They seem to have no coherence at first sight. On one of the walls, there is an image of four figures wearing decent clothes while walking in the water toward an indefinite destination. There are three other works installed on the opposite wall. A grey image titled "Forced Forgetfulness" shows a crowd of people with unclear faces while raising their fists. Moreover, two smaller paintings are installed on the wall, which are reproductions of Bakhshi's metal and wooden boxes. The rest of the works are displayed on white walls and on tables in front of them.

It is mentioned in the project's description that collective memory is reviewed in the mind of those who persistently consider its signs and constituents. Engaging each part of these memories, we encounter questions within them. Those unfamiliar with Nasser Bakhshi's working style experience the incoherence mentioned above when engaging with these works. However, on a second look, the works and the details inside the boxes seem to present a personal narrative that completes the collective memory puzzle; memories rendered inside the dusty boxes and left to be forgotten. Bakhshi engages his viewers, on the one hand, with the size of the boxes and the details inside them, and on the other hand, with time and his going back and forth. Some of his paintings depict his play with frozen time at one moment; they remind the viewer of photographs captured at low shutter speeds with a slight movement by the subject. So they include the past, the present, and the future in one frame to play with time in the images.

Looking at the works, again and again, helps the viewer understand newer details; someone staring at a far distance from inside the box, the Milad tower placed inside a smaller box, two women standing with their back to the viewer, a crowd which moves toward nowhere, and finally, an unfinished flight. 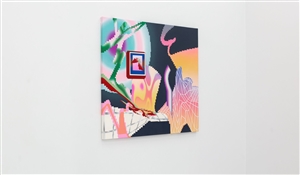 A Review of Yousha Bashir's Exhibition at Parallel Circuit