From September 30 to November 13, 2021, a retrospective of  Manouchehr Yektai's works is held at Karma Gallery in New York.

Brushstrokes, thick spots, courage, still life, bright and transparent…  Usually, what comes to mind about Yektai is among these keywords or similar phrases. This event features Yektai's works from the late 1950s for about six decades onward and illustrates, in a comprehensive look, his focus on form, color, and space.

Manouchehr Yektai was courageous in painting! His works are precisely between figurative and abstract painting. He was neither in need of approval nor wanted to be in the spotlight. All of his excitement and passion was reflected in his paintings. He was so western that he was considered one of the painters of the New York school, and at the same time, he was so eastern that his paintings recalled lyrical poems. Although he put thick layers of paint on the canvas, the result was subtle! A spectacular contradiction in form and meaning that was by no means repulsive and his paintings still stimulate the appetite for watching. His subjects were simple and his painterly behavior was deep.

For years, he painted still life and landscape. He was loyal to the subject and his painterly manner and he couldn't tolerate any rule beyond them. While painting, he put his canvas on the floor; he made a balance between freedom and the control of painting this way. He averted the rules and paid attention to the image itself. In fact, his individual aesthetics was the light of his way. Considering the historical progress of Yektai's works at Karma Gallery, We acknowledge the evolution of tools in the artist's works and the reflection on the expressive capacity of painting based on the considered tools. For example, in the works related to the 1950s and 1960s, the mass of paints is less and the paints are thinner; in a way that the brush plays the main role and as a result, we are faced with images that have a wider color palette and are created more passionately than the next periods of his career. During the 1970s and 1980s, with the use of a spatula, Yektai created images that were more massive and mainly concise. In most of the works of this period, the colors are brighter than before, and the artistic excitement has been replaced with artistic action. Then, through the 1990s and 2000s, we encounter an amazing balance. The works of this period show the two previous situations at the same time: the high mass of paint along with the brush stroke. A vast pallet and a summarised confrontation. Images are at the climax of the artist's perfection.

One of the most interesting points in these periods is the presence of landscape in Yektai's paintings, which we encounter the most in the 1970s and 1980s. In fact, even though the main subject consists of flowers and pots, fruits and still life, sometimes the landscape, especially the one seen through the window, has entered Yektai's compositions. The semantic reading of the presence of landscape, especially in the artist's mid-career, brings this interpretation to mind: The painter's tendency was shifting from inside to outside and then, back inwards.

Manouchehr Yektai was never a member of any group; he was floating in his paintings, life, and poems. "I'm trying to be a contemporary painter", he said, "to be a modern painter, a painter of the current time, to paint a type of painting that you have never seen or experienced before." The same spirit was reflected in his poems. The fearless painter was only twenty-two years old when he left Iran! But his past did not leave him for the rest of his life. He never presented the image of an American painter and tried to introduce a new, personal, and eastern visual world in his long life. Finally, Manouchehr Yektai died in November 2019, at 97 in solitude.

Today, around the second anniversary of Manouchehr Yektai's passing, the exhibition of his works at Karma Gallery is a new opportunity and a reminder to get deep in his paintings, reread the technical and semantic findings of his works and become more familiar with his unique works. The works that have always praised life and were the same as life: full of ups and downs, full of challenges, but simultaneously beautiful, charming and wanting! 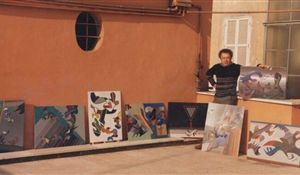