When talking about the precursors of Iranian modern art, Iranian-Armenian artist, Marcos Grigorian (1925-2007), is the most prominent figure among the pioneers in the field. He is a charismatic cosmopolitan artist regarded as a forerunner in Conceptual Art(1) and the founder of the 1st Tehran Painting Biennale (1948). Additionally, Grigorian is one of the founders of the Iranian Modernist Artists' Club, a pioneer in Environmental Art, the founder of Galerie Esthétique (1954) – one of the first modern galleries in Iran – and also one of the first artists who turned to Western Pop Art. By combining indigenous materials and modern expression, Grigorian created global artworks and knew how to present himself and his works to attract the viewer's attention. His tendency toward Expressionism and, later, Abstract Expressionism, the visual style of Pop Art, and experimenting with installations and performances, made him a diligent artist in various expressive styles.

Grigorian's artworks were auctioned for the first time in the International Modern and Contemporary Art event (April 30, 2008) of Christie's Dubai. His most expensive work until 2022 is "Crossroads" which was auctioned for $264/000 at the Modern and Contemporary Arab, Iranian, Indian and Pakistani Art event (March 3, 2008) of Bonhams Dubai. 46 of Grigorian's artworks will be auctioned at Bonhams New York from June 10 to 23, 2022. Such an event, according to Bonhams, rarely happens, because there are very few auction houses in the world that are privileged to sell artworks gathered from the private family collection of a famous artist.

Bonhams auction house, a rival of Christie's and Sotheby's, was established in 1793 in London. It is renowned for its success in selling Asian artworks. In fact, Bonhams' distinguishing feature is its special approach to new markets. For instance, in 2009, Bonhams introduced African art to the global art market for the first time. Today, Bonhams has two venues in London and multiple other venues across the globe.

The estimated collective sales value for Grigorian's artworks that will be sold in Bonhams' upcoming auction ranges between $506/000 to 729/000. These artworks, from the private family collection, cover 50 years of his career path and include expressionistic, abstract, earthworks, rugs, and a wide range of materials and execution styles such as oil paint or straw on canvas, mixed materials on wooden panel, engraving, weaving, printing on wood, mixed materials on board, and also a variety of subjects like portraits ("Artist's Self-Portrait", "Sabrina", "Pensive Portrait", etc.), human figures ("Adam and Eve", "Refugees", "Nude", etc.), still lives, cityscapes, forest, tree of life, and abstract reliefs. Estimated prices for Gregorian's five most expensive artworks are mentioned in the following:

Therefore, the most expensive lots in this auction are among his collection of earthworks and abstract reliefs created in square and rectangular formats which may refer to his past when he migrated several times and felt homesick for his motherland's soil. Using natural materials like straw, sand, gravel, and clay on canvas has created a conceptual texture in his works. He tries to convey such a concept through media and form; sometimes with the connection between circle and square shapes as symbols of sky and earth, spirit and material, life and death; where a new life emerges like sunrise from behind the dried background.

1. It is important to note that even though Conceptual Art was introduced as an art movement for the first time in Iran in an exhibition titled "Blue Works" (1974) arranged by the Independent Artists Group, Kamran Diba had run the first Conceptual Art show in Iran titled "Prodigal Waterman" at Seyhoun Gallery in 1966. This was a multi-media installation including a series of walls and huge boxes on which human figures were painted in actual size and were connected to each other using apparatuses of water supply, such as water faucets, fittings, and plumbing tools. 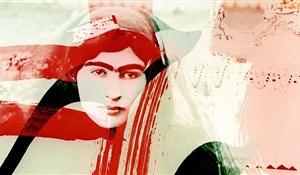 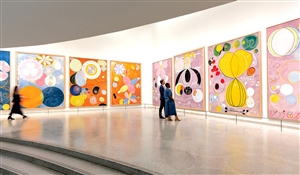