Ghobad Shiva (b. 1940, Hamedan) is considered a poster designer with a unique design style in the world-scale field of graphics. Based on the cultural and social context of his homeland and by artistically using elements of miniature paintings, ancient motifs, traditional calligraphy, Tughra, Nastaliq script, and sometimes simple but meaningful lines in precise compositions, Shiva has created an ever-lasting art.

During the first decade of Shiva's professional activity, Iran's cultural and artistic atmosphere was not only significantly influenced by modernity but also dominated by the Nationalism discourse, which affected Shiva's poster designs. He used ancient visual elements like the Rosette flower and the image of the Achaemenid king fighting a sphinx(1) in the poster he designed for Shiraz Art Festival in 1969. To develop the conceptual form of this poster, whose primary subject was percussion instrumental music, he visually rendered musical rhythm in the geometric and radial shapes of the lotus flower.

In the poster of the 11th edition of Shiraz Art Festival, for which he was awarded a diploma and the medal of Brno Biennale of Graphic Design(2), Shiva colorized the image of the Achaemenid soldier with diagonal, flowing lines and patterns changing from azure, blue, and green to warmer colors like orange, red, and yellow. In most of his posters, the work's title is executed in a handwritten script. For example, in the poster of the 5th edition of Shiraz Art Festival (1971), instead of any image, Shiva used golden Persian calligraphy on the work's red background. The handwritten title, occupying a considerable portion of the poster, was the beginning of a style that is now prevalently followed by Iran's new generation of graphic designers. Ghobad Shiva has a specific signature. His work's diversity and execution style indicate the artist's creative and curious mind. In the poster of "Story City" play (1968), he depicted silhouette images of distorted animal figures, placed the show's title in a rectangle curved on top, and produced a poster in accordance with the play's concept: an image of anonymous creatures in black clothes.

Shiva explains how he designed the poster for the exhibition of Saqqakhaneh artworks on the opening occasion of the Tehran Museum of Contemporary Art in 1977:   "I couldn't satisfy myself by combining some of the works by Saqqakhaneh painters in the form of letters. I thought more about Saqqakhaneh itself. Eventually, I created this three-dimensional Saqqakhaneh. I wrote the word "Saqqakhaneh" on a cardboard, framed the whole thing, and asked Bahman Jalali to take a photograph of it. I included the rest of the information in the empty black space at the bottom of the poster."

Shiva's poster for the 6th edition of the Asia-Pacific Film Festival (1978) is also indicative of his ready and creative mind. On the poster's yellow background, the artist has used the image of a roll film reminiscent of the number 6 because of the twisting form of the film on which a rainbow and blue-white clouds are depicted, creating a mood consistent with the poster's title.

Ghobad Shiva was one of the founders of Iran Taalar (Ghandriz) and an invited member of "The Free Group of Painters and Sculptors". In a show titled "The Treasure and The Area 1" (1975), Shiva, along with other group members, presented an installation of a light thread ending in a mirror. He designed the catalog cover and poster for the Iranian pavilion at the "Switzerland's Wing" show (1976), where the artists of the Free Group(3) presented their works.

After the Iranian revolution, with the change in the prevalent discourses throughout society, Shiva's governmental posters tended toward miniature paintings, miniature brush drawings, elements of Persian literature and mysticism, Persian carpet patterns, and calligraphy. Shiva used Iranian traditional and mystical elements, calligraphy and miniature paintings, Gul-u-Murgh patterns, vases, cypress trees, and candles in designing posters for the Saadi Commemoration Congress (1984) on the occasion of his 800th birthday and the Hafez Commemoration Congress. Here are some other works Shiva designed during the first decade after the Iranian revolution: a poster for Kianoush Ayyari's movie "Beyond the Fire" (1987); Iraj Saghiri's movie "The Strange Journey" (1987); Mohammad Bozorgnia's movie "Angelica's Ship" (1988); Khosro Sinaei's movie "The beloved in the house and…" (1988); "Bus" (1978), a film in the foreign cinema festival; "Festival for Kurdish Art in War" (1988); and "Selected Works of Iranian Jewelry Art" in Tehran's 15th International Exhibition (1989).

The combination of traditional and modern elements is evident in Shiva's recent works. In the poster he designed for the exhibition of the 7th Iranian Graphic Design Biennale (2001), he placed the image of a pencil in the center of the work. There were also two angles on the sides of the pencil and one on the top, giving flowers to the graphic designers (symbolized by the pencil), while the handwritten text elements were reminiscent of an angel's wing. In the poster he designed on the releasing occasion of the book "36 Days with Sadegh Hedayat," he used the circular shape of two coffee stains within Hedayat's glasses and a compressed handwritten note in the center of the work on a white background, reminding the viewer of Hedayat's face and mustache.

Ghobad Shiva is the founder and organizer of Tehran's first Poster Biennale, a selected member of the Alliance Graphique Internationale (AGI), and a selected member of the WMOC International Organization in 2011. He has also won awards in the poster design competition for the 3rd Shiraz Art Festival (1969) and several poster design competitions for different art festivals in Iran (1974). He was also awarded a medal and diploma for his poster at the Brno International Graphic Design Biennale in Czechoslovakia (1978). His poster was selected at the 7th Iranian Graphic Design Biennale (2001), and he received an honorary diploma for his poster at the 1st International Poster Biennale of the Islamic World (2003). Shiva's works are currently stored in MoMA, the Hokkaido Museum in Japan, the Iranian Museum of Graphic Design, and private collections. Shiva was the first Iranian figure assigned to a graphics school in the Britannica encyclopedia.

1. A relief on the East entrance of Sad Sotoun Palace.

2. Shiva was inspired by a poster designed by his master, Milton Glaser (1929-2020), the American graphic designer.

A Note on an Artwork by Massoud Arabshahi 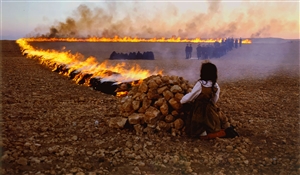