Hilma is one of the forerunners of abstract painting. It is commonly believed that Wassily Kandinsky was the first abstract artist, but in fact, af Klint made the first abstract painting in 1906. As well as Piet Mondrian, Wassily Kandinsky, František Kupka, and Paul Séruseir, she created her works under the influence of prevalent spiritual beliefs and cults during the late 19th century. Theosophy was one of the most important cults; all of the artists mentioned above was either official member of it or their art was directly affected by it. For instance, influenced by the book "Thought Forms", written and illustrated by one of the main followers of theosophy, Kandinsky painted "Lady in Moscow" according to a theosophy belief about vibrations and their connection to different states of mind.

Hilma af Klint, who had graduated from the Royal Swedish Academy of Fine Arts and had achieved a good position as a successful woman painter in Sweden, was also influenced by theosophy. Exceptional about her artistic position was that she did not work in connection with her contemporaneous art movements. She worked almost in full isolation from the contemporary art world for her whole life, and this is what makes her a notable case to study, so as to provide insight into her work and life. Besides some books and articles about botany and theosophy that she kept in her house and its bookshelves, no other book was found indicating her awareness and knowledge about the art world at that time. Moreover, the fact that similar beliefs among these artists have led to the creation of abstract paintings by all of them, has marked this art movement as a case to be reviewed.

Hilma, with three other women, held meditation sessions that were, after a while, directed by a master. Based on this spiritual director's advice, she started to create artworks spontaneously in a state of ecstasy; a method that is commonly followed in Zen school. She gradually concentrated on mystical subjects, occult beliefs, and her perceptions during the meditation ecstasy. Since then, she exclusively tried to create artworks spontaneously or to depict her observations while experiencing ecstasy. Hence, her abstract paintings emerged from mystical subjects and the occult.

Hilma willed that her artworks should only be displayed twenty years after her death. She believed that the public cannot understand her works yet and that these were paintings for the future. In addition, she insisted that her works should be displayed all at once and she wished that such an event would take place in a temple with a spiral structure. Hilma's artworks were noted for the first time in 1987 during a show of artworks by abstract artists at the Los Angeles County Museum of Art (LACMA). The exhibition was focused on spirituality, which was the mental basis of all the artworks. Presenting abstract art and its origins from a new viewpoint, the event was, in fact, divulging issues that had not been previously put forward publicly and seriously. These issues were all related to the artists' beliefs in mysticism and occultism and revealed that formalistic analysis was just a cover over these inclinations as the original source of abstract art. Hilma's paintings with their lively colors and their geometric and body-like forms in compositions associated with inexpressible ideas, attracted much attention. Moreover, the artist's isolation in spite of the creation of these artworks was another notable fact for the viewers.

In 2018, the Guggenheim Museum in New York, which is focused on modern and contemporary art, arranged an important exhibition of her works called "Hilma af Klint: Paintings for the Future", which was remarkably considered by numerous visitors. Ever since she has increasingly become the most supported modernist woman artist in the world and many new artworks are inspired by hers. For instance, in the Armory Show 2021, a group of artists called "Hilma's Ghost" presented a series of paintings in the form of Tarot cards that were inspired by Hilma's paintings and received considerable attention from the viewers. They were also mentioned in the New York Times report of the event. Today, documentarians and art history analysts pay much more attention to Hilma's artistic activity. In addition, all the aforementioned factors caused abstract art history to be reviewed with more precision. Although Hilma's works were never exhibited in a temple, they were put on display in a white magnificent museum that looked like a temple with a spiral structure. 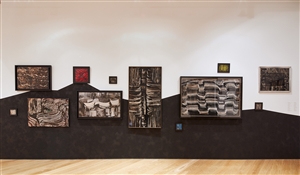 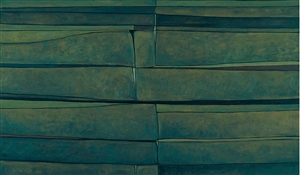 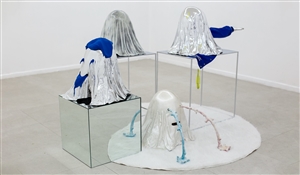