In April 2019, a solo exhibition of Ali Akbar Sadeghi's works entitled "Demons" was held at the Kamil Gallery Monaco, France, curated by Fereshteh Mousavi. This exhibition was a diverse collection of drawings on paper, oil paintings, animations, sculptures, and collages showing the path of Sadeghi's works from the 1970s to 2019 concentrating on "demons" in superhuman faces. But in this gallery, well-known demons' visages by Sadeghi are not the only represented works, and sometimes the demons in paintings from the "Coalition" collection are narrating a story in a symbolic effect. The "Coalition" collection (2001-2002) includes 40 symbolic paintings of the unity and complicity of the world colonial powers to destroy love and human values; works created almost at the same time as September 11. In 2003, a twelve-minute animation from the "Coalition" series was produced. It was written by Sadeghi and co-edited and animated by Sadeghi and Alireza Kavianrad. This animation won the jury prize at the Animation Festival of the Institute for the Intellectual Development of Children and Young Adults (2004).

In the "Coalition" collection, unlike Sadeghi's previous series, the expressing way of works distances itself from the detailed miniature painting, and the dominant modern atmosphere reminds the professional viewers of Surrealist paintings by René Magritte and Salvador Dalí. However, the Surrealist theme of the works, in combination with historical and mythological anecdotes, detaches it from the purely Surrealist expression emanating from the artist's subconscious.

In "Coalition 4" we see a vertical frame in which the main subject is in the shape of a huge apple in the center of the image. Apples have a special place in Sadeghi's works and have got different meanings in different colors and shapes. The artist has not only symbolized colors but also appointed humanistic features to apples by considering the objects' personification. The apple has two symbolic positions; it is a sacred and forbidden fruit, and in Greek mythology is the food of the gods; also because of its circular shape it is considered as the symbol of the world, power, and reign. "In Christian art, it is the tree of knowledge fruit that Eve picked, and hence it is considered a symbol of descent.1" (Hall, 1994). In this sense, the apple symbolizes earthly desires or surrendering to them. It seems that in this work, a huge stone and gray apple with red and blue stripes tied on its branch (symbol of the flag of the dominant countries), is the symbol of destructive power and bitten apples in red color of love and yellow color of holiness and purity symbolize the homeless people who have been politically dominated by the world powers and eaten by them. Bitten and scattered apples on the ground, referring to the concept of Descent, indicate that the sin has been committed and the Fall has taken place.

This land is a symbol of a world in which security and freedom have departed and it's overshadowed by the gray demon of colonialism. The red sky and a piece of blue cloud in the middle of it, which are in the same color as the stripes around the apple branch, emphasize the occurrence of this ominous event.

In an interview with Shahnameh Pajouhan Club in July 2019, the artist stated his attitude toward life and its effect on his works: 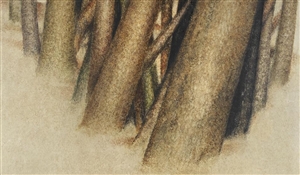 A Note on an Artwork by Massoud Arabshahi