"In a Silent Way"; A Show by YZ Kami in Spain

An exhibition by YZ Kami, the Iranian contemporary artist, is currently running at Museo de Arte Contemporáneo de Castilla y León. The show started on June 4, 2022, and will continue until Jan 22, 2023. "In a Silent Way" comprises a variety of artworks, including portraits, installations, and abstract works. According to the artist, painting has always played an essential role in his life even though he was educated in fields different from art. He is now one of the well-known artists in the art scene of the U.S and has lived in New York since 1984.

A Short Biography of YZ Kami

Kamran Yousefzadeh (b. 1956) is an Iranian artist known by the pseudonym YZ Kami. During his childhood, he became interested in painting because his mother's paintings inspired him. Despite his strong connection to art since the beginning of his life, he continued his education in other fields. After receiving his diploma from Alborz High School, he moved to the U.S. and studied philosophy at the University of California, Berkeley. Then he lived there for one year and moved to France to continue studying philosophy at Sorbonne Université.

After graduating and because of his journeys to different countries, Yousefzadeh developed a particular attitude toward painting and architecture. His interest in portraiture was amplified by visiting ancient portraits displayed in museums. He dedicated a short period of his life to creating a documentary about Ahmad Fardid (b. 1910, Yazd, Iran), the Iranian philosopher. After a while, however, he turned back to his main concerns and interests in painting. At the beginning of his career path in New York, he created a series of portraits inspired by images of his childhood. During the next decade of his career, he produced an untitled series of 18 portraits. He has never stopped portraiture. According to the artist, portraying people has always been one of his main interests in art since his childhood, when he attended his mother's painting classes supervised by Alimohamad Heydarian (Iranian painter and Kamal-ol-Molk's student), until his education at Sorbonne Université. But he gradually altered his portraits to achieve the style that we see today in his work. His worldview developed and turned to his inner self as his huge portraits replaced the small ones. His older portraits show faces sitting in front of the painter as a model while looking ahead. But they gradually tended to look down, and the artist's attempt to add a spiritual mood to the subjects challenged the portrait's colors. In addition, the bigger canvas surface gave the artist more freedom of action to achieve what he imagined about portraying faces.

YZ Kami's portraits look like huge, blurred photographs that seem to be dusted to reduce their sharpness. The subjects of these portraits seem like saints that cannot be overlooked. Transfixed by the big portrait, the viewer tries to discover the subject's inner self among the pale colors and averted looks. In a later series titled "Dry Land," which was created between 1999 to 2004, YZ Kami juxtaposed these portraits with buildings. This experiment may come from a background dating back to the artist's youth when he developed a considerable interest in Iran's ancient architecture which eventually emerged in his abstract paintings created during the 1990s.

About "In a Silent Way" Show

YZ Kami's works displayed in "In a Silent Way" may be classified into four different categories, which are connected by the way they are installed in the gallery's space. Eighteen portraits that may relate to the artist's attitude at the beginning of his career path are installed on one of the walls. Compared to other works, these are smaller in size. In other spaces of the gallery, large works consonant with the artist's recent approach to painting portraits with a spiritual mood; faces of relaxed men and women standing in a dusty space while staring somewhere at the bottom.

Two portraits are distinguished from the others; one shows a black person against a red background, and the other shows the artist himself looking ahead, unlike other paintings. There are also other works with different visual atmospheres. These are black and white images of individuals in white robes gathered in a spiritual place while performing rituals. On another wall are two works titled "Black Dome" and "White Dome," which suggest the artist's mystical vision; they show illusory circles leading to absolute blackness or whiteness in the center. Finally, another work is installed on the ground, similar in structure and content to the "Black Dome" and "White Dome." This is a collage titled "Rumi; Book of Shams-I-Tabrizi," inspired by Iranian architecture and the atmosphere of group prayings. The work consists of interrelated elements which remind the viewer of Kaaba. In an overall look, it seems that the artist is influenced by elements rooted in his homeland, despite his physical distance from it. 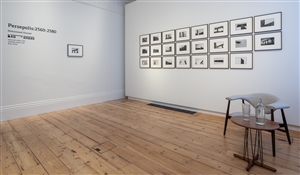 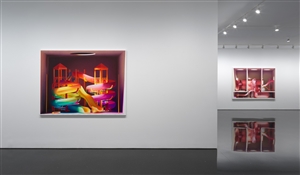 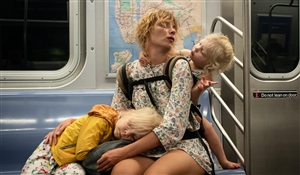