The 19th edition of La Gacilly Photo Festival entitled "Visions of the East" started on June 1, 2022, in La Gacilly, France, and will continue to the end of September. The festival displays photographs in the city's outdoor spaces and train stations in Nantes and Reims. Photos by five famous Iranian photographers, including Abbas Attar, Ebrahim Norouzi, Gohar Dashti, Hashem Shakeri, and Maryam Firouzi, are among the works exhibited in this festival. The Silk Road Art Gallery presents photos by Shakeri, Norouzi, and Firouzi.

Abbas Attar, known as Abbas, is among the most prominent photojournalists around the world and one of the prominent photographers of Magnum Photos. His black and white photographs of wars, revolutions, and other crucial worldwide events and his explorations into different religions, ranging from Abrahamic to Indian, are among the most admirable pictures from the 20th century. His works had not been displayed since he died on April 25, 2018, until the La Gacilly Festival with the collaboration of Attar's family, arranged a retrospective show. The images presented here are the results of 55 years of Attar's professional activity in photojournalism alongside his other lesser-known profound photographs: Black and white pictures, where reality and myth, ridicule and fanaticism, disorder and beauty, and light and shadow intersect. The series is arranged in cooperation with Magnum Photos.

Ebrahim Norouzi is a world-renowned photojournalist whose work focuses on social and environmental issues. His photographs are featured in the most important domestic and foreign publications, including  TIME, The New York Times, and The Washington Post. He has been working in Associated Press for about a decade. In an overall look at his photos, which have been awarded the World Press Photo prize several times, his expertise is clearly visible. This year at the La Gacilly festival, two series of his photographs are displayed;  in the first one, he photographed Lake Urmia, which will soon dry up, and in the second, he shows the relation between Iran's water resources and the Iranian people who are more likely to suffer drought. Norouzi presents a specific style in his photography which may be narrated as a dream.

Gohar Dashti is a famous Iranian photographer whose works have been exhibited in several shows, museums, festivals, and biennales worldwide. By referring to contemporary history and culture, she concentrates on social issues and developments based on sociological and anthropological viewpoints. Her lived experience in a war-stricken area makes up the core of her works. In a series titled "Today's Life and War" (2008), she depicted moments in which a dual life is running even though the place has been ruined because of the Iraq's war against Iran. These photos show a young couple doing their daily activities in the middle of a war zone. In her works, which the art community has widely welcomed, Dashti has used geographical features to present a narrative and its relation to her lived experience. During the La Gacilly festival, her latest work, "Near and Far" (2022), inspired by Islamic art, landscapes, and architecture, will be unveiled.

Hashem Shakeri is a young Iranian photographer who has been awarded multiple prizes, including the Lucas Dolega Award and the UNICEF Photo of the Year Award. He worked for several years in Sistan and Baluchestan Province, one of the remotest regions of Iran, and produced a series of photographs titled "Elegy for the Death of Hamun," in which he depicted the environmental changes and drought with distinguishing colors and careful framing. In addition to his series of photos about the drought in Sistan and Baluchestan, he presented another series focused on new satellite cities. He shows citizens of Tehran that have no choice but to move to the city’s margins because of the drastic increase in housing prices.

Maryam Firouzi, the Alfred Fried Award 2019 winner, is a multimedia artist who has held several exhibitions in Iran and other countries. Combining different artistic media, including calligraphy, painting, and cinema, which she believes are interrelated, she explores her homeland, where a woman's social position is inevitably complex. Gender and identity are two main keywords that she innovatively uses in her photos to challenge all the presumptions about the medium of photography. In 2021 she was awarded the International Women in Photo Association (IWPA) prize. Firouzi is the first Iranian woman to win this award, and her photographs are displayed like a tour in different cities around the world, including Paris, Dubi, Tokyo, etc.

About the La Gacilly Photo Festival

La Gacilly Photo Festival is an outdoors exhibition founded in 2004, aiming to provide a free, public art space. Every summer, photographs by great, world-famous photographers are installed in the city's streets, parks, and alleys to present art enthusiasts with a space to visit the works. 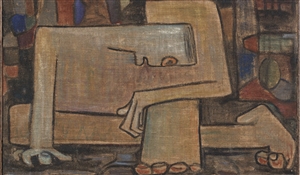