Dastan's Basement at the First Edition of Frieze Seoul

At COEX in Seoul, Frieze Seoul will hold its first edition on September 2-5, 2022. With the collaboration of South Korea's largest art fair and Frieze, Frieze Seoul is a novel event that will begin its activity in this city. This is the first Frieze in Asia and the fifth Frieze in the whole world after Frieze Los Angeles, Frieze New York, Frieze London, and Frieze Masters. During its first edition, more than 110 galleries will participate, and Patrick Lee, director of Frieze Seoul, will manage the event. At this event, a prominent group of Asian galleries will be accompanied by well-known international galleries from 20 countries. This year Kiaf Seoul, a leading and important exhibition in South Korea, will be held simultaneously with Frieze Seoul.

Two other sections will be introduced in Frieze Seoul's first edition, in addition to the main section: "Frieze Masters" section curated by Nathan Clements- Gillespie, director of Frieze Masters section which showcases the art from different centuries of history, from ancient to 20 century and "Focus Asia" section, curated by Y. Christopher Lew and Hyejung Jang, presents ten galleries from across Asia, including Dastan's Basement from Iran featuring Ali Beheshti's works. Ali Beheshti (b. 1988 Qom) is a young Iranian visual artist who began his artistic activities in 2011. Among the galleries with which he has collaborated are Homa Art Gallery, Emkan Gallery, Inja Gallery, and Dastan's Basement. His last solo show entitled "Opaque" hold at Dastan's Basement last year.

In 2012, Dastan's Basement was established in Tehran with a mission to display a vast range of Iranian modern and contemporary art. As well as hosting solo and group shows, this gallery publishes artists' books and monographs about Iranian art and shows art-related films, and is also an active participant at major art fairs such as the Armory Show, Art Basel, Art Dubai, Teer Art and... in last years.

At Dastan, there are three sections with different approaches; Destan's basement, Destan +2, and Dastan Outside Projects. The oldest part of the collection, Dastan's Basement exhibits the works of emerging and lesser-known artists. In 2015, Destan 2+ was added, presenting well-known and prominent artists. Dastan Outside Projects were established to extend artistic activities in an experimental manner outside the gallery, and the Parallel Circuit is one of the most recent. 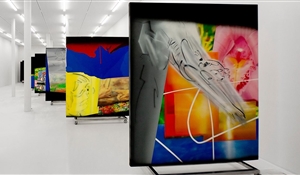 Hoda Kashiha at Parallel Circuit: In Appreciation of Blinking 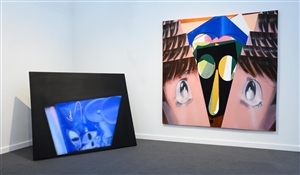 A Review of "Mad"; a Solo Show by Ali Akbar Sadeghi at Parallel Circuit Gallery