From late April 2022, the Venice Biennale has started its 59th edition in the presence of artists worldwide. Besides presenting works in the central exhibition, the countries attending Giardini and Arsenale pavilions have introduced their artists. M+, Hong Kong's global museum of contemporary visual culture in the West Kowloon Cultural District, and the Hong Kong Arts Development Council (HKADC) present the exhibition "Angela Su: Arise, Hong Kong in Venice", Collateral Event at the Venice Biennale 2022.

Before entering the art world, Angela Su (b. 1958, Hong Kong) had graduated in biochemistry from the University of Toronto. The atmosphere she experienced in her field of study has some relation to her project at the Venice Biennale. Although she has studied fine arts at the Ontario College of Art and Design as well, her show is focused on some extensive research into the science of the contemporary era and science fiction stories. She says:

"Science, the history of science, the impact of technology, and the transformative body are the recurring themes in my work."

Su has experimented with a wide range of media, including video, performance, drawings, hair embroidery, and installations. Her exhibition, which is presented in layers and multiple rooms, is a result of using all these artistic media together. In general, her works are displayed in four different but connected sections.

Before visiting the interior space, the viewers encounter the title of the show, which is written in green on a black background: Angela Su: Arise, Hong Kong in Venice.

When the viewers come to the exhibition, they can see a courtyard with circus posters installed on the wall. Titled "Playscape for the Feathered Girl" (2022), the installation in the courtyard consists of a giant swing made of steel and cast concrete, a circus ring, and circus posters.

Once the viewers enter the pavilion's interior, they can see an installation of 15 videos arranged in three groups hanging from the ceiling playing some old footage of circus performers and dancers. Right from the beginning, the artist seems to be directing the viewer's vision toward a physical balance that is also non-physical at the same time. Su says about these video installations:

"For a tightrope walker, it's a constant balancing act to guess what's safe and what's dangerous."

The video collage, titled "Tiptoeing the Kármán Line", centers around the Kármán line, a boundary positioned at an approximate altitude of about 100 kilometers above sea level that borders the earth's atmosphere from outer space.

Moving past the room, the viewer enters a space divided by a red curtain. Here, Su has presented her fine anatomical hair embroideries and drawings. The exhibition's space is designed so that, besides the artworks, their shadows attract the viewer's attention, especially regarding the biggest and most prominent work visible in this room, "Laden Raven" (2022). The juxtaposition of the raven's shadow on the ground with that of the ceiling's beams appears as a symbol of captivity, where shadows of the beams, like prison bars, hold the raven captive.

A video is playing right next to the red curtains. The video shows two hands playing a risky game, one holding scissors while moving them very close to the other. This video reminds the viewer of a performance by Marina Abramović titled "Rhythm 10," in which she used ten knives and a tape recorder. Holding a knife in one hand, she started hitting constantly and quickly the little spaces between the fingers of her other hand positioned on the white surface of the ground. During the performance, she mistakenly stabbed herself in the finger multiple times while her moan of pain was recorded on the tape.

Su's game of life and death shares a visual and conceptual resemblance to Abramović's work, yet with a uniquely different vision.  For those who try to understand the meanings of that performance from the limited number of photos available, every detail excites contemplation. In an overall look at the works presented in this room, the "Laden Raven," which depicts a body with nothing left of it but some bones and feathers, may convey meanings of both life and death. The body represents death, while the human embryo is a sign of life. Su says about the works displayed here:

A lot of the work is about the interior of the body, physical transformation. Pain is also about risk-taking and you have to prepare your body mentally for that kind of process of transformation.

Su considers the last part of her show a pseudo-documentary, a combination of reality and myth. This video work, presented in a room with walls covered in over-sized pyramidal acoustic foams, is titled "The Magnificent Levitation Act of Lauren O"; Su estimates that approximately 80% of her works are rooted in scientific, political, and cultural truths, whilst the other 20% stems from her vivid imagination. It points to the multiplicity of oppressor regimes and invasions that take place nowadays and have caused different forms of resistance.

In an interview about this video, the artist explained that she had been inspired by her studies on the history of protests. Inspired by her research, Su envisions Lauren O, a fictional character who believes she can levitate, and her involvement with Laden Raven, an activist group catalyzed by the US anti-war movement of the 1960s, comprising trapeze artists, funambulists, and other marginalized individuals. The group together with others attempted to levitate the headquarters of the U.S. Department of Defense with their psychic power as an act of raising objections against the war, but have since gone underground with all records of their existence erased by the authorities.

Lauren O is the pivotal character of the film, whose role was inspired by the main character of a novel by Octavia Estelle Butler titled "Parable of the Sower". In the book, the central character Lauren Olamina learned to fly in her dreams. She and her family were among the very few people who had survived a major crisis in Los Angeles while her father tried to save the city that was being ruined due to war and drought. In the middle of the story, Lauren loses her family when their house catches on fire. This turns her into a character who is now facing an apocalyptic world. In Angela Su's performance scene in the video, the artist hanging five meters above the ground symbolically represents Lauren's companions who were imprisoned. Su believes that history repeats and reproduces itself, during which many similarities may be perceived. She tries to reveal the periods of history that have been forgotten. There is a big disco ball in the last room of the exhibition, which is also another element that echoes what the viewers have seen in the video.

By reviewing the whole show, the viewer concludes that all the presented elements and forms are, in fact, a search to mentally prepare for some kind of suspension or arise; to lead the viewer step by step toward such concepts, she has utilized different body positions, objects, images, and mediums. Angela Su has previously exhibited her works in several museums and institutions: "So long, thanks again for the fish" in Levyhalli, Suomenlinna, Helsinki; "100 Drawings from Now" at The Drawing Centre, New York; "Meditations in an Emergency" at Ullens Center for Contemporary Art in Beijing; and the 17th Biennale of Sydney.

Freya Chou, who has previously curated for the Taipei Biennale and the Shanghai Biennale, is introduced as the Guest Curator for the Hong Kong Collateral Event and Ying Kwok as the Consulting Curator, assisted by Jenny Tam, Assistant Manager, Exhibitions. This is the fifth collaboration between M+ and the HKADC for Hong Kong's participation in the Venice Biennale. 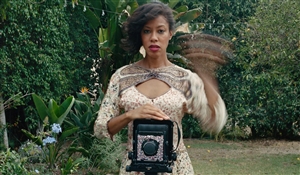 News-A work by Charles Hossein Zenderoudi was sold at Christie's Paris at a price of 176,400 euros.