Through the Stars of the Milky Way

During the 30 years since the establishment of the Tehran Museum of Contemporary Art, it is the very first time that nine museum halls are allocated to displaying the works of one single artist. Iran Darroudi is an acclaimed artist who has enjoyed every fruitful moment of her life and has successfully portrayed her 60 years of love for Iran and its culture in her paintings. The crowd and welcoming of people were unique on the inauguration night. The memory of this exhibition entitled "Everlasting Persian Gulf" is unforgettable for Iranian contemporary painting. The digital print of "Iranian Petroleum" (Our Veins, The Earth's Veins) is presented alongside several other works with a common theme in the show. In 1969, this work was published in two full-color pages in the world's most prominent press such as The Times, Life, and Newsfront with multi-million circulation. Also, a few films based on the artist's life and works are scheduled to be screened in this show, and some conferences will be held with the masters of this field. This exhibition will be shown until June 12 at the Tehran  Museum of Contemporary Art. Following is a brief conversation with this Iranian painter a few minutes after the opening ceremony.

I was numb for a few moments. I had to speak about my 50 years of presence in contemporary Iranian art in the shortest and most succinct sentences in a way that I would not bother the people standing and listening to me. I never make drafts for my lectures. When speaking, I just use my feelings as I do while painting. That moment was strange; I could barely control my tears. I knew very well that these moments were the most important minutes of my life. When I finished my speech, I felt like I had said everything I wanted to say. A few moments later, I realized that I hadn't mentioned the people who helped me hold the exhibition and blamed myself for this great neglect.

I had no comparison in mind as I had never attended an opening ceremony at TMoCA. Nevertheless, I heard from museum officials that this is the first time that such an eager crowd is coming to visit the show. Of course, with its elevated walls and labyrinth-like galleries, the museum space created an outstanding splendor for each painting. In this atmosphere, the resonance of the congratulating voices sounded more glorious and majestic. It was actually a special feeling that those who had come and I     had in common.

My presence in France over the years was just a geographical matter. I genuinely believe that human beings will always go back to their origin. Like many of my compatriots, I have a historical memory that is much stronger than my acquisitive experiences.

This memory reminds me that Iranians are the first nation who believed in God and that the great Achaemenid Cyrus was referred to as the prophet in the Torah. My historical memory recalls that Ferdowsi wrote, "If Iran does not exist, I do not want my body to be alive". I know that Hafez, Rumi, and Sa'di are the guardians of my culture and the true definition of my nationality. In this regard, it is safe to say that the attractions of Western culture have never been the basis of my mentality as an Iranian.

The mental basis and personality that you see today were formed as a child and then influenced by the European cultures, including France. Deep down, I've remained a child whose father told her: Ferdowsi was one of the greatest poets in Iran, and if it was not for him, we wouldn't be speaking Persian today.

The desert has always been one of the main themes in my works. Previously my deserts were flowery, and now I am glad that there is flooding in them. For me, deserts are essential in their mystical sense as well as their present-day material value in storing our oil resources. I'm from Khorasan, a desert suburb; I know the scorching sun of the desert noon and the cold of its starry nights.

As a child, I used to count the shining stars of the desert to put me to sleep. Today, I think one day will come that one of the stars of the Milky Way will remove the light-years away between itself and me and will land in my studio.

In-between the distance of moving a brush, I reach the galaxy and then myself. How beautiful it is to see and appropriate the world.

I am in my paintings with all my existence, my whole apprehensions, hopes, and competence.

To answer your question, I have to say that I have been searching for values inside myself for many years, and then I adapt what is within me to what I see. In this adaptation, my weapon and, at the same time, my harbinger is nothing but honesty. It is with honesty that one can see the weak points and recognize the values of art.

I believe that the main intellectual principle of a painter should be based on her independence and personal disaffiliation. Let me elaborate: no dependent person can act honestly and be unbiased in her thoughts. The artist is, more than anyone, an independent individual in her thoughts and origins. A human being that, in an absolute sense, is free from any dependence. In this respect, since I was 17 and busy painting on fabric as a university student, I have not accepted any financial help even from my family to run my life. Nevertheless, my paintings have never been detached from social issues. My works such as "Iranian Petroleum", "Growing in this Way", "The Pulse of History",  and " To Break Off " are proof of my honesty, and I understand my historical mission as a painter witnessing my era. From my point of view, any kind of dependence violates the originality of the artist's thought.

I must acknowledge that I detest the paintings with slogan-like messages. I believe that what is worthy is expressed better in silence, and we need to understand the secret of the silences.

We have talented and passionate youth, yet, they should be educated appropriately to prevent their talent from going astray. The weakness of young people is that they are not self-confident enough and are following their favorite masters or painters. I am more worried about the professors and educators rather than the students; I want them to know that they should be aware of the great responsibility they have as professors. One cannot be a master of painting and does not know the basic definition of painting. It is agonizing for a person to accept the hardships and frustrations of an artist's life but not to taste the rapture of "creativity". Creativity is the offspring of talent; the talent that must be fertilized by culture and meaning.

When I was preparing my student works for this show, I realized that they did not have much leverage over the works of the young participants here, except that I have taken the second step right because of enjoying qualified teachers and proper education. Keep in mind that since I'm not dealing with universities and students, I am not familiar with the painting of the younger generation.

In this exhibition, I  have started my student works section with a nearly complete black work called "Black Night". Today, I am undoubtedly thrilled as my pieces are almost white and filled with light. What a valuable experience; it began with darkness and then led to luminosity and whiteness. I think I had to go through different stages of life to understand the meaning of light. What I want to say is that these initial experiences were necessary. Several works of mine as a   student have been displayed to make a comparison for our students and explain the experiences I have gained in reaching the light.

I believe it is possible to be a painter and paint badly, but someone who is not a painter and paints is neither a painter nor herself believes the lie she is repeating. Moreover, painting is a challenging profession with its own difficulties and struggles, a solid and determined character is needed to endure its failures.

I rarely go to exhibitions. Indeed, you can always learn, but I have a duty to apply what I have learned. Not long ago, when I went to the Tehran Museum of Contemporary Art, it was enough for me to see a work by Nasser Assar hanging in the middle of the hall; it made me so happy that I didn't want to lose this happiness by seeing other likely bothering works. Even in Paris, I don't see the shows of giants like Raphael. The world and the creativity of a genius like him are far away from me to the extent that I don't need to make any comparisons. I rather see paintings of Zao Wou-Ki, which I love very much. His work is within my human perception and seems understandable. He is an abstract painter, and his works are not similar to mine in any field. Although I see a lot of copies of him in my colleagues' works. Yet, what a great difference between his creativity and these coward dull copies. I close my eyes on these imitations so that they don't get hurt, or else I have to get compensation from the causers.

I have never taught and have no students. The youngsters coming to my house are mostly the readers of my book "In the Distance Between Two Points" who host me at shows in cities like Kerman, Sari, Qazvin, and Isfahan. The courage and audacity of our younger generation have the comfort that warms the winter of my life. If they don't learn from me, at least my library can be helpful.

Most Iranian cultural associations and forums in Paris or Brussels invite me to deliver a speech. I accept if it coincides with my trip to Europe. Basically, I avoid the lecture sessions where someone reads from a text; if someone has something to say, they will say it at one time. I would like to talk about topics apart from my painting, style, and work. It may not seem repetitive for others, but it's boring for me. The painting is not audible; it is visual.

I had anticipated that all the cities of Iran would be invited to see this exhibition. The cultural atmosphere of other cities has been significant to me, and because of this, I have held numerous exhibitions there in recent years. A few years back, Kerman and Isfahan welcomed me warmly, and I attended a group show held at the Isfahan Museum of Contemporary Art a few months ago. I expect the mass media to help me invite more cities to come and visit this show.

In the show I had at the Iranian Artists Forum, many visitors came from Bandar Abbas, Mashhad, Tabriz, Shiraz, and even someone from Semnan on foot. This time, with the widespread use of the internet and social media, I expect more visitors from other cities for this exhibition; this will make me sure that I have succeeded in fulfilling my cultural mission as an Iranian person.

I must admit that the people of our land who love art have encouraged and accompanied me from my first exhibition to the present day. This show is the product of such a    mutual love: my love for Iran and its glorious history, and the love of its noble people for art. 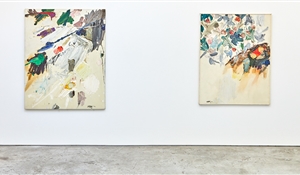 A Review of Manouchehr Yektai's Show at Karma Gallery 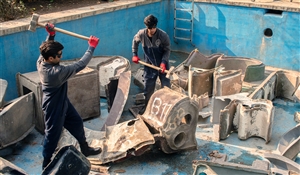 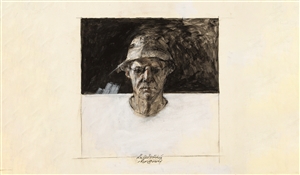