Interview with Behrang Samadzadegan About the "Minimalism and Conceptual Art" Show

"Minimalism and Conceptual Art" group show started on Jun 21, 2022, with over 120 works by 34 artists. The show will continue until September 18, 2022. So we decided to interview Behrang Samadzadegan, the exhibition's curator, about the show's importance, its Minimalist and Conceptual art approaches, and the necessity of a comprehensive introduction of Western art to the Iranian audience and art students.

I can hardly remember where it started. Last year, I had several meetings with Ehsan Aghaei, the former director of the Tehran Museum of Contemporary Art. During these meetings, we discussed presenting works in the museum's permanent collection in multiple shows under different titles – research or thematic. We also noticed that the most attractive works in the museum's collection, which have been rarely displayed, are Minimalist and Conceptual ones.

More details about the show are mentioned in its subtitle. "Minimalism and Conceptual Art in the mid-20th Century Art" is the title. The main subject is related to two decades when post-1950s art emerged, that is, right after the dominance of high art aesthetics due to Abstract Art becoming so prevalent. This is when we see the undisputed dominance of Abstract Expressionism. The intellectual roots and fundamentals of transcendent thoughts about Abstract Expressionism are not in any contradiction to such movements. All movements that emerged after the 1950s, were focused on subjective art, high art, and idea-based art – what Kandinsky referred to as "meaning".

The critical movement that emerged after the 20th century put forward the theory that said our lingual achievements for semantics in art have now turned into academic principles. The principles and rules were learned and persistently followed after the first generation of Abstract Expressionist stars. The critical movement suggested that art has turned into a ruled matter instead of following transcendent issues; a ruled matter whose fundamentals are constantly repeated. As a result, critical thought was formed against such aesthetic rules. This exhibition tries to portray the story of the first two decades of this critical thought and its influence on its related movements initiated in the mid-20th century.

Museum shows or curated shows based on archival case studies are not indicative of our society's present social and historical conditions. The show is not supposed to be based on specific reasons or needs rooted in our society. To form a dynamic art community with dialectical and discourse-based thoughts, archival-art history exhibitions are crucial.

During the last 25 years, these concepts have been linked with the thoughts in our art community. Many of us have tried to work in a discourse field consisting of the two mentioned concepts. I have always believed that we have never had an integral museum archive about these two concepts and their surroundings. Additionally, in Iran's contemporary art history, we have somewhat confused their meanings and have acquired a defective understanding of them. Knowing the theoretical fundamentals of the two concepts is very important. Due to our incomplete understanding of the subject, we attach things to these concepts which are not necessarily relevant. For me, this is a vital necessity. Moreover, based on what I remember, some of these works have not been displayed for a long time. This is, too, an important matter to consider. I believe that we must think about the new generation of artists, students, young people and what we give them to think about.

Every exhibition that uses the museum's archive and collection essentially contains a crucial educational aspect.

I see. I mentioned that these two concepts have always existed as readable concepts in Iran's art community. By art community, I mean the generation of professional artists, current artists and students, and even the general art audience. Our art community has never had the chance to have a platform that could present the two movements and their origins as a physical experience.

This is an important issue because we have two completely different experiences of Minimalism and Conceptual art, especially in the 1960s and 1970s. The experience of reading about this art is very different from the experience of physically being inside an environment that deals with it. We are talking about a series of works that, for their artists, were not critical visual experiences; instead, what mattered was the audience's physical experience and presence. The Tehran Museum of Contemporary Art provides a platform for running such an exhibition to attract art enthusiasts of any generation.

My approach as a painter is different from my approach as a curator toward art history. In this show, I have tried to leave my position as a painter and play the role of an art history researcher. I have tried to recreate the content and conceptual approach in this exhibition. One of the essential duties of a curator is to work with these artists' mental, theoretical and methodological mechanisms and the two movements. I insist that I have tried to follow the thoughts of the artists of the two movements. This feature has caused a different exhibition than other shows displaying works from the museum's collection. Works presented in this show belong to Dan Flavin, Donald Judd, Sol LeWitt, Robert Morris, and Bernar Venet, whose works have been previously exhibited regardless of their way of thinking. So until now, the work's installation, its relation to the space, and its completeness or incompleteness were unnoticed. I tried to install works based on the artist's mental method.

A book will be published based on the research and the exhibition. Texts presented here are only meant to provide the audience with contextual awareness. Assume that these texts are introductions printed in a brochure that tries to explain the understanding on which the selection of works was based. I even tried not to mention my own line of thoughts about the works. The texts target a wide range of audiences; those who are interested in critical texts, others interested in radical historical texts, and others who want to read biographical texts and become familiar with the history of these movements. I tried to write the texts so they could attract the highest number of audiences. I tried to use the least specialized terminology to make it possible for the general audience to understand the texts.

To honestly explain the necessity of presenting these texts, I refer to what I mentioned earlier. The reality is that at all levels of Iran's art community, we have a defective understanding of Minimalism and Conceptual art as two critical concepts in art history. I noticed the necessity when I saw the misunderstanding among professional Iranian artists. The confusion is not only in artists' and critics' understandings, but is also perceptible when they express their opinions. I thought we needed a deep experimental reading of the two concepts because their legacy has influenced the contemporary path of Iran's art.

The show matters for those with more expertise, either a student in their first year of academic education or an artist with many years of artistic background. This show presents the audience with a physical experience by which they can gain a better understanding of Minimalism and Conceptual art. We know that one of the main rules in these movements is removing the absolute visual experience and emphasizing the audience's physical and spatial experience.

Engaging with something different from typical assumptions about works of art is also attractive to the general audience, and the show can be challenging for them. I also think that the minimalist appearance of the exhibition is entertaining for the visitors because works and viewers can directly relate to the space. This is the case worldwide; it is not just about Iran. This aspect may not be understandable for those who consider art and artist sacred. But, interestingly, viewers can experience an entertaining atmosphere in contemporary art spaces. Even if the viewers cannot profoundly and intellectually read the works, they can simply enjoy being in the show. The exhibition is a platform that entertains viewers with contemporary art.

Nonetheless, there are many imperfections. Our art space is financially poor and we lack many facilities. Our facilities are limited to the things that have been preserved and even frozen during the last 50 years. However, regardless of the limits, I cooperated with the best colleagues I could ever have on a project. We all aimed at running the exhibition.

I don't know why they have not been displayed so far. Part of it may be related to the relocation of documents during the 1979 Revolution, so it took the officials a long time to gain access to the information again. Some works were ignored, and after a while, they were moved to the list of the museum's collection. Some other pieces were transferred to Iran as the revolution was happening; these were bought before and delivered to Iran simultaneously with the Revolution's chaotic period. That is why some works were not even been registered.

Another important reason we should all consider is that exhibitions of works from the collection should be held as a routine at TMoCA. These shows should not be held rarely or should not depend on a specific exhibition. Otherwise, this leads to seasonal shows with personal tastes. I suppose the excitement about the show is because we lack exhibitions of this kind.

This is also why some of these works have never been displayed. The Tehran Museum of Contemporary Art, now considered a museum of modern art, has never held such events regularly. A few shows have been arranged. So we end up in a stillness where both our art community and the museum are caught up. We have accepted such behavior; that is, rarely setting a show, and that's it! This imposes stillness on the art community and prevents any creative challenge or diverse discourse; anything left as a memory of the past in the society. So works have not been displayed, and no critical discourse has formed about curating works from the museum's collection.

The only thing that has always been my purpose and I have talked about it several times, is 'hope'; That is, to let our art community experience a more dynamic atmosphere by forming profound discourses in art history. Society will become more active in such an atmosphere and will not necessarily seek to match what it sees with what it used to see. This is a crucial problem in the Iranian art community, both in significant events like the museum's exhibitions and smaller events like a show in a gallery. Despite improvements in information and dynamism, the Iranian art community is still caught in the stillness that unconsciously originates from matching what society sees and thinks. This has made us not present any new ideas compared to the world's contemporary art, and it is a serious problem in the challenges of our art history!

It is time for us to take up this way of thinking to achieve a conclusion about that history, not to honor the initial encyclopedia settings and remain loyal to it. This is the issue, can we finally create a discourse? Can we explain what we have concluded about a hundred years after a movement? We aim to put forward a controversy and all its surrounding matters against the institution of art history. I hope such activities can make the current mindset of the art community more dynamic; activities that make challenges and comparisons more dialectical. 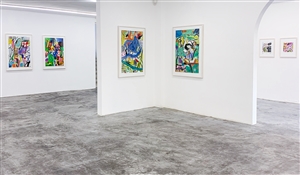 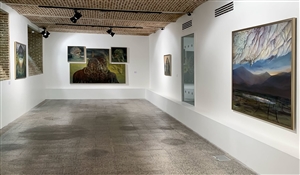 Interview with Nasim Davari about "From Shahnameh" Exhibition at Aaran Projects 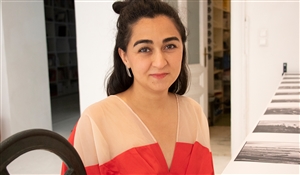