In a special ceremony at the Photographers' Gallery,  held on May 12, 2022, in London, Deana Lawson, the American photographer, was announced as the winner of Deutsche Börse Photography Foundation Prize. The prize is among the most prestigious annual photography awards and has a value of £30,000. Each year, regardless of nationality, a photographer who has had the most and best activity and collaboration with the European photography community, either in running exhibitions or in publication, is presented with the award.

The workflow of this photography contest starts with a large group of one hundred internationally well-known photography experts who select the artists; among them, the jury board then nominate four artists for the award.

Deutsche Börse Photography Foundation Prize 2022 nominees are Deana Lawson; Gilles Peres, French photographer; Jo Ractliffe, African photographer, and Anastasia Sanoylova, Russian photographer. Among these, Deana Lawson was announced as the winner. The other finalists each received a monetary award of £5,000 which is increased by £2,000 compared to the previous year.

Deana Lawson (b. 1979, New York) was shortlisted for her exhibition "Centropy" which attracted the attention of the jury. The show was held from June 9 to October 11, 2020, in Kunsthalle, Basel, and received the Hugo Boss Prize 2020. This was an exhibition of mostly large-scale photographs with mirror frames next to holograms, 16mm projections, and smaller images printed on mirrors or on rock crystals. She has depicted the lives of black people in domestic settings and next to decorative and symbolic objects to which there is a religious aspect. In fact, by combining documentary, family, and portrait photographs, Lawson has created scenes to describe black people's lived experiences with imaginary narratives. The title of this show is derived from a scientific term – entropy – related to thermodynamics, which explains how the electrification of material can lead to restoring order and structure. In Lawson's photographs, characters are rendered unutterably majestic as if they have full control over the world in which they are photographed. 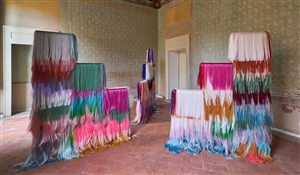