A Review of Davood Emdadian's Life and Work

Davood Emdadian (b. 1944, Tabriz) was born in a family where most of the members were engaged with art(1). According to his sister, their father, Javad Emdadian, was very fond of poems and literature and had skills in painting. He copied printed landscapes and became Davood's main inspiration for taking up painting. Davood's artistic talent was evident since his childhood. His first works were paintings of landscapes he found on postal cards.

According to Yaghoub Emdadian, despite being very naughty, Davood was praised for his paintings in the fourth grade of primary school. His works were displayed in a show in a school classroom (2) about one of Kalila and Demna's stories (the story about the cooperation between a mouse and a crow to free a bird). In 1960 he was considered Tabriz's best student painter. He attended the country's student camp, went to Ramsar, and earned the second rank. From 1961 to 1963, he won Iran's Best Art Student Award in Tehran, Ramsar, and Rezaeiyeh. During these years, he painted alongside old painters in Tabriz like Bajlano and Hajizadeh. He also worked in Ashoub Koulian's studio and, without letting his family know, resigned from high school, where he studied Maths and Physics. He eventually registered at Mirak Art School in 1963. In 1965, he arranged a solo show about landscapes around Tabriz in the art school's hall, and he successfully graduated with an art diploma the same year. To continue his education, he moved to Tehran in 1966 and participated in several exhibitions, including the "Art and Culture Festival of Tehran Art School" (1969) and a show at the National Museum of Iran (1969). He graduated from the Faculty of Decorative Arts in 1970. In the early 1970s, he started using light refractions and geometric shapes in his figures and landscapes, a style he kept following for the rest of his career path.

During 1974, Davood Emdidian participated in multiple exhibitions, including a show at Seyhoun Gallery displaying figurative paintings of his wife, Soheila Niknam, the First International Festival of Tehran's Art, the Iranian Art Festival in Isfahan, and a show at Lautrec Gallery in Tehran. Receiving a one-year scholarship grant from Iran's Ministry of Culture and Arts, he moved to Paris with his wife. In 1976, on a trip to Iran, he arranged a show at POOP Gallery of Iran-America Society, making him famous in Iran. At the same time, in addition to shows and art fairs in Paris and Shanghai, an exhibition of his works was arranged in 1978 at Ghandriz Gallery, showcasing his paintings of landscapes and parks of Paris. This was his last show in Iran before he died.

In 1979, Emdadian won the fourth rank award of Karlsruhe, the international exhibition of European art in Germany. In 1981, he graduated in painting and printing from the National School of Fine Arts in Paris and received a BFA in Plastic Arts from Sorbonne University in 1982. Afterward, he participated in several other shows, including an exhibition in Cité Internationale Des Arts in Paris (1983-1985), Atelier Gallery in Bochum, Germany (1983), a show at Anne-Pinçon Gallery, Paris  (1984), and another show at Michael Raymondian Gallery in Geneva (1986). In 1993, the 1930s Museum, Boulogne-Billancourt in France, hosted an exhibition titled "Davood Emdadian's Trees." The museum also published a book about the show at the same time. This event was a starting point for his professional life and made his work a matter of interest for art audiences and critics. He won the Taylor Foundation(3) award in 1997 in Paris and then performed an exhibition there. He also won the Charles Oulmont Foundation(4) award in Paris in 2003.

The artist's early death on February 11, 2005, due to liver cancer, put an end to the creation of his mythical, cosmic trees, standing like huge mountains on an unknown land and reaching the height of a cloudy sky while there is a play between lights and shadows on their leaves immersed in the accumulation of reds, oranges, and greens. Free of all the –isms dominating the art world, in his poetic solitude throughout his 25-year career path, Davood concentrated on a single subject and developed it through various interpretations and techniques.

According to Fatemeh Emdadian, Davood "never directly taught any student, but many who went to him in Paris told that he was willing to take anyone to museums for days and talk to them about painting for hours whether or not they were involved in arts. He considered such journeys the way to educate. […] He was an independent artist, and his independency made him alone. He learned to paint alone, continued alone, and died alone(5). Since his death, his works have been presented in multiple solo and group shows.  Artevie Contemporary Art Center, Lorrez Le Bocage, France hosted an exhibition titled "Tribute to Emdadian, Painter of Silence" in 2008. A group show called "Children Models, from Renoir to Arditi" held in 2009 at Muse de l'Orangerie in Paris included two of his works alongside paintings by world-famous artists such as Renoir, Picasso, Monet, Matisse, and Manet.

The show aimed to present the experiences of children whose artist parents painted them on tableaus or created their sculptures. In addition to the show, Picasso's grandchild produced a documentary film in which he talked to the offspring of those artist families. Yashar Azar and Negar Emdadian were among the children speaking about their memories and experiences about their artist father. Emmanuel Breon, the exhibition organizer and the director of the museum, has written in the show's catalog about his first meeting with Davood Emdadian, "In 2007, I went to the UNESCO building to attend a conference. While walking along a cold, modern hall, which was similar to most other modern facilities, I noticed huge paintings, the subject of which was enormous trees covering almost all the surface of the tableaus that belonged to an Iranian painter whose name was not familiar to me. Among all the other works in that hall, I was amazed by Davood Emdadian's trees. Anyway, just as one would send a message with a bottle across the sea, I left my phone number with a few lines of notes for Emdadian in the special notebook designed for the artists in the show, hoping to visit his studio someday. After a while, the painter of those magical tableaus called and invited me to his studio. He warmly welcomed me to his home and studio in the 19th district of Paris. With his friendly and modest behavior, Davood took me to his workspace, designed like a 19th-century studio. He seemed so shy with his genuine facial expression and thick beard, which was a symbol of his occupation. The space was filled with the pleasant smell of paint and oil. The same feeling of fascination captivated me again when I looked at his tableaus of amazing trees installed on high walls."(6)

In addition to group shows, three solo shows have been arranged to commemorate Davood Emdadian; "A Journey to the Self" (2017) by Morteza Asadi at Aria Gallery, "Davood Emdadian's Paintings" (2017) at Hoor Art Gallery, and "An Exhibition of Two Series of Works By Davood Emdadian" at 009821 Projects. Emdadian's artworks are currently preserved in multiple museums such as the Tehran Museum of Contemporary Art, Keshavarzi Bank in Iran, and private collections.

3. Known as "The Artists Society" in its first years, the Taylor Foundation was established in 1844 by Isidore Taylor (1789-1879). The foundation's objective has ever since been to support artists by different means such as arranging exhibitions, granting subsidies, and giving awards to the art community.

4. Aiming to support artists, Charles Oulmont (1883-1984), musician and art critic, established the Charles Oulmont Foundation in 1982. The foundation annually grants two €2000 awards in four fields: theatre, literature, plastic arts, and classical music. Since the beginning of its activity, the foundation has awarded more than 400 artists regardless of their age, nationality or any other criterion.

6. "This Time the Painters' Children Became the Model; Paintings by Davood Emdadian Alongside Renoir, Picasso, and Gaugin in the Museum of Paris," Source: ISNA, December 7, 2009. 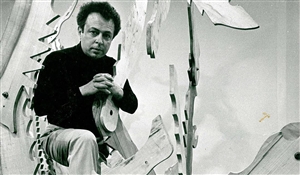 Mohsen Vaziri Moghaddam's Artwork in the Context of Art History