A Note on Davood Emdadian's Works in "24 Heures" Newspaper

This article is translated from the original text in French and no changes have been made to it.

The height of the trees

Reymondin Gallery in Lausanne: Forest time with an Iranian painter, Davood Emdadian. To the superior jungle with its huge square-like trees which seem flowing generously and romantically in a warm light. This is Rousseau and his brilliant promenades, this is the memory of life's promises that the tree carries within itself. From its potent height and its root striking in the earth and the sky, we feel nostalgic.

Davood Emdadian, who lives in Paris, was born in Tabriz in 1944. He is a discovered talent in his country and started a European career in 1975. The audience of Emdaidan's exhibition may be surprised when doesn't see any sign of the East. These works are somehow considered "classic". Emdadian states that: "I combine myself with whatever I see. When I enjoy an artwork and it affects me, I'll use some of its features in my own works according to its visual tradition. Provided that it enriches my inspiration. I can be "Eastern" yet romantic, symbolist, and abstract and also consume resources all."

Most of the oil and gouache are dedicated to the tree. These huge trees which seem like "statues between ragged blocks and pollard gardens" are signs of life, growth, stability, and victorious nature to Emdadian. The light shines on the massive woodlands, woodlands which act as a shelter for little happy humans; like preserved Garden of Eden in an intimate tutelar's shadow. A kind of magic emerges from this shining delicacy which its technique is borrowed from Impressionists. Ancient secret of all privileged forests which are places to divine murmurs between breathtaking leaves.

These grand women are another new and discovered activity in Emdaidna's works. These works are not as convincing and charming as those dense and abstract squares; squares that are hit by broad sensual strokes of light filled with joy.

This article has been prepared in cooperation with Davood Emdadian Foundation. 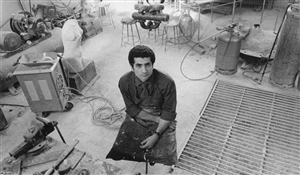 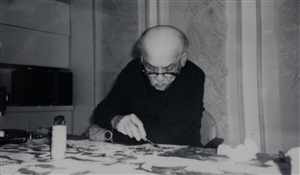