The main themes in Shirin Neshat's works are women and gender issues. Religion, politics, and identity concerns are recognizable in her artworks as well. ... Read full biography 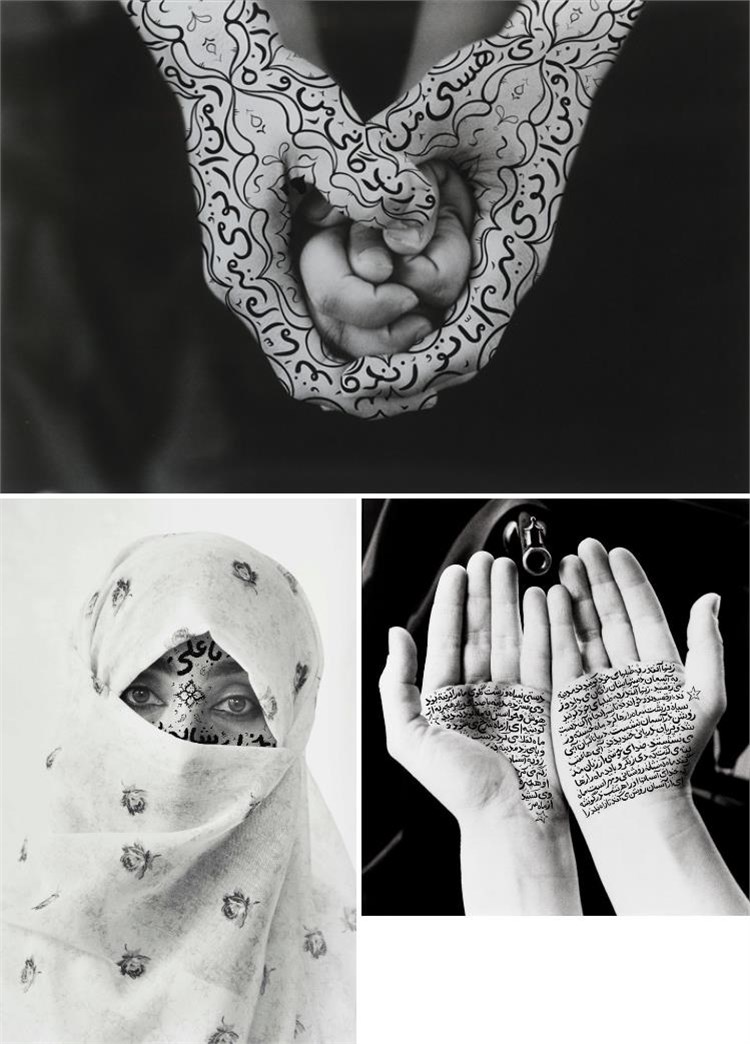 The main themes in Shirin Neshat's (b.1957) works are women and gender issues. Religion, politics, and identity concerns are recognizable in her artworks as well. Her works are rooted in indigenous life and Iranian society. She has made lots of artworks on the situation of Iranian women.

Designs and writings in Persian script are some of the characteristics of Neshat's works which are imprinted on her and other people's hands, faces, and feet. Self-portraits are greatly used in her works; Neshat symbolizes her artworks by some elements like guns and swards. Women who apply kohl and cover their bodies and faces with hijab or niqab are largely demonstrated in her works. Her artworks have been developed in form and content during 3 decades; she switched from photography to video art and installation, then made some efforts in film directing. She also quitted the mere focus on Iranian women and indigenous issues; therefore, she tried to address the other countries and their problems as well. Countries like Egypt, Morocco, Azerbaijan, and even the United States. She has paid attention to unfair policies, poverty, the health system, and American migrates racial discrimination.  $$quote$$

In 1975, Neshat left Iran to study art at UC Berkeley and completed her BA, MA , and MFA. Some years later she became the manager of Storefront for Art and Architecture. After lots of years, in the late 1980s, she traveled to Iran. This had a huge influence on her, so after observing the changes in Iranian society conditions, she decided to showcase her understanding of Iranian social and political issues by focusing on women. In 1993 she started the "women of Allah" photo project. These black and white photos were some self-portraits which made her famous.

The Neshat's earliest work was titled "unveiling" and was exhibited in 1993 in Franklin Fernis Gallery. Then her artworks were showcased in several group shows. She acquired the Mid-Atlantic photography fellowship in 1995. She participated in the fourth Istanbul Biennale and Venice Biennale the same year. In 1997 she won the photography fellowship from New York Foundation for the Arts and had a solo show in Freiburg Art Center for "women of Allah".

As was mentioned earlier, she started to make video arts and video installations besides photography. In her trilogy video installation, "Turbulent ", "Rapture" and "Soliloquy", she has a poetic and philosophical point of view toward gender and has dissociated from political critics. Her later videos have the same viewpoint. She won the golden lion for the video installation of "Rapture" at the 48th Venice Festival.

During the 1990s and 2000s, her artworks were exhibited in various group and solo shows, galleries, museums, and art fairs around the world and gained several awards such as the Grand Prix at the Kwangju Biennale in 1998.

During the 2010s she participated in several biennales and art fairs and her artworks were displayed in different famous museums. She exhibited her new project titled "Land of Dreams" in 2019-20 in different galleries such as the Goodman Gallery. This project included several portraits of American migrants and two video arts. One of the videos which turned into a feature film narrates a story of an Iranian student, Simin, who traveled to America and took photographs of American migrants and wanted them to talk about their dreams. This photo series was showcased at Frieze New York art fair and Photo London 2020 by Goodman Gallery. This movie was displayed in Venice Film Festival 2021. In the same year, Neshat won the World Master of Photography award at the Photo London art fair. This award donates to a contemporary photographer because of his/her artistic achievements.