One of the most well-known Iranian artists who became able to use Iranian art traditions in a new form, Parviz Tanavoli is called "the father of modern Iranian sculpture" and one of the "founders of the Saqakhaneh movement". ... Read full biography 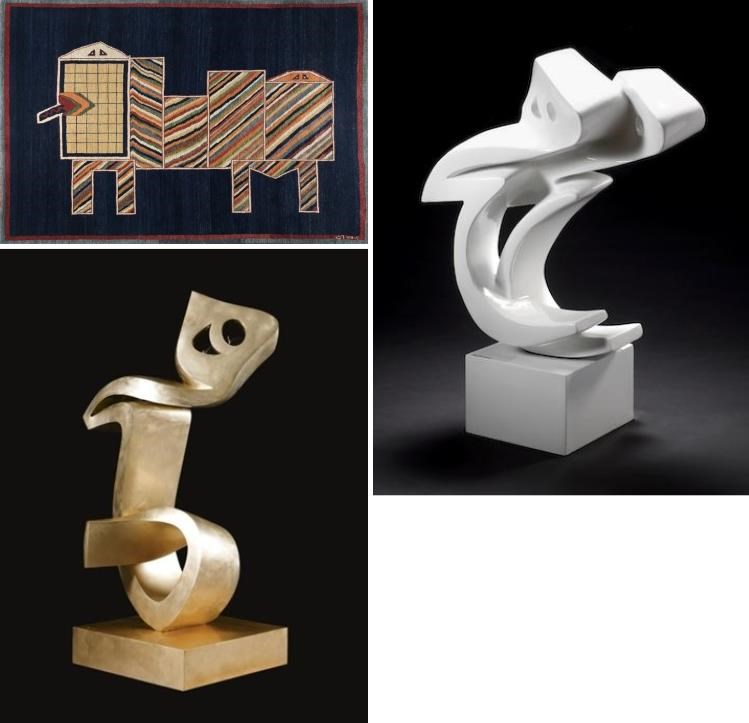 One of the most well-known Iranian artists who became able to use Iranian art traditions in a new form, Parviz Tanavoli (born 1937) is called "the father of modern Iranian sculpture" and one of the "founders of the Saqakhaneh movement". He used Iranian ritual, traditional, and folk forms as part of the structure of his sculptures; he went beyond this, and his works found narrative and metaphorical content. He was able to create visual equations for literary concepts.

Tanavoli started his artistic activity by learning the violin under the tutelage of great masters such as Abolhasan Saba. In 1953, the Fine Art School was established and Tanavoli spent a three-year course in sculpture there. He received a scholarship from the Department of Fine Arts to study at the Academy of Fine Arts in Carrara, Italy. When he was nineteen, he went to Italy and continued his education at this academy; but after two years his savings ended and he came back to Iran.  $$quote$$

In 1957, Parviz Tanavoli presented utterly different works, including pottery and scrap metal sculptures, in an exhibition at the Farhang Hall. This was the first time that a collection of works by a sculptor was displayed in Iran. After holding this exhibition, Tanavoli became able to obtain a scholarship from the Ministry of Culture and completed his studies in Italy. In 1958, he won the sculpture award of the first Tehran Biennale.

Returned to Iran in 1959, Tanavoli held a solo exhibition at Reza Abbasi Hall. He was only twenty-three years old when he was invited to teach sculpture at the Minneapolis College of Art and Design. In the same year, he won the royal award of the second Tehran Biennale and took part in the 29th Venice Biennale as the representative of Iran.

In 1960, Tanavoli established his own personal studio and gallery called Atelier Kaboud, which became a place to display the works of prominent artists of the time. Tanavoli played a vital role in modern Iranian art by teaching at the Faculty of Decorative Arts and the University of Tehran, forming various groups and seminars. For the first time at university, he set up a casting workshop for students. In the early 1960s, Tanavoli started to research about Iranian handicrafts and collect them. In the process of these investigations, he became acquainted with the traditional and folk culture of Iran, prayers and spells, religious objects such as Áláms, locks, and tools related to shrines. These visual signs became the source of inspiration for the artists of the Saqakhaneh movement and new forms of modern Iranian art.

Tanavoli used these folk forms in his sculptures. Also, the lattice windows of the shrines, nightingales or hoopoes, and the brass locks and hands became repetitive symbols in his works. He used Saqakhaneh objects as part of the structure of a sculpture; in addition to geometric volumes, he turned to Saqakhaneh's materials, namely copper and bronze, and he also used materials such as ceramic, steel, and fiberglass to make his sculptures. From the very beginning, he considered the character of "Farhad Koohkan" in a symbolic sense and recreated his body with scrap materials, Saqakhaneh signs, and three-dimensional shapes.

Parviz Tanavoli settled in the United States from 1962 to 1964 and held several solo and group shows. Returning to Iran in 1964, he became the director of the sculpture department at the University of Tehran. In 1967, together with Sohrab Sepehri, Bahman Mohassess, Hossein Zendehroudi, and Abolghasem Saeedi, he founded "Group 5". In the second half of the 1960s, Tanavoli created three-dimensional volumes of "Heech" sculptures that emerged from calligraphy with a combination of Nastaliq and Shekasteh Nastaliq.

In 1972, a work by Tanavoli was installed in front of the City Theater of Tehran. This was the first modern sculpture in Iran to be placed in public. In 1973, the "Carpet Association of Iran" was established by him. Being very interested in Iranian folk culture and art and being engaged in research in this field, Tanavoli held a traveling exhibition of his collection called "Lion Rugs of Fars" in the United States, England, Switzerland, and Australia in 1975. The following year, he exhibited another traveling exhibition of the "Lock and Cage" series in the United States, which was about pre-Islamic locks in Iran up to the early twentieth century.

Tanavoli settled in Vancouver, Canada, in 1989. In 1997, he received the Joseph V. McMullan Award from the Near Eastern Art Research Center, Washington. In recent decades, Tanavoli's works have been exhibited in solo and group shows, as well as at numerous art fairs. They have attracted the attention of foreign critics and artists. Tanavoli's sculptures have often been sold at prestigious auctions worldwide at impressive prices. His collections of sculptures "Heech", "Hands", "Lock and Cage", and "Poet" are world-famous. Tanavoli has also written and published numerous books and articles on traditional Iranian art and culture, including "Pictorial Carpets", "Locks from Iran", and "Talisman: Traditional Iranian Graphics". In 2017, the exhibition "Parviz Tanavoli Retrospective" was held at the Museum of Contemporary Art in Tehran, which played a significant role in reminding the place of this great artist in the history of contemporary Iranian art.