Nikzad Nodjoumi is an artist who has always taken notice of political and social contexts, depicting the relationship between power and violence in his paintings in more than his 6 decades of artistic activity. ... Read full biography 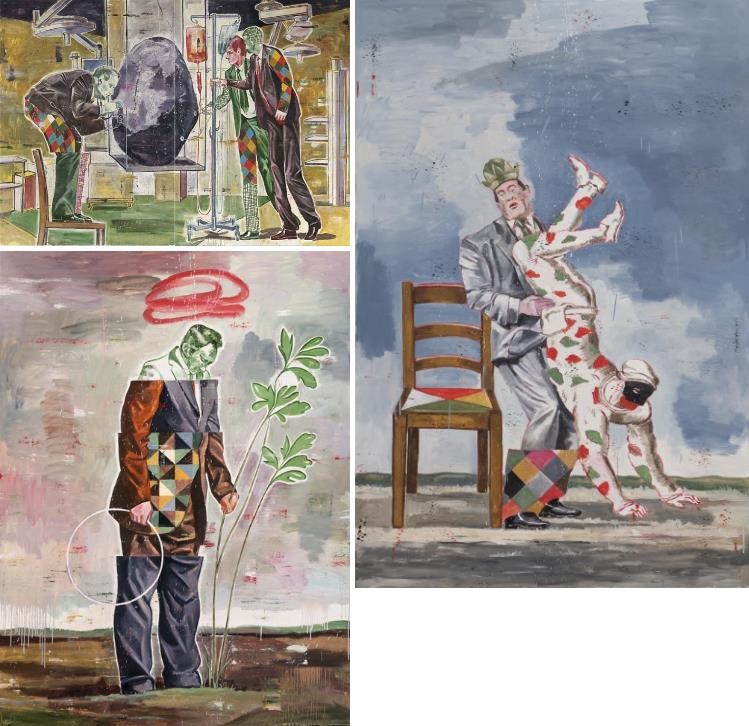 Nikzad Nodjoumi (b. 1942), known as Nicky, is an artist who has always taken notice of political and social contexts, depicting the relationship between power and violence in his paintings in more than his 6 decades of artistic activity.

A recurring element in his artworks is the suited men as a symbol of the world's statesmen and politicians. Perhaps at first glance, the atmosphere of his paintings may appear unfamiliar or even humorous yet the humor is bitter and critical, stemming from the heart of history, politics, and the news.

Born in Kermanshah, Nodjoumi imitated the works of Russian painters in his adolescence; following a friend's advice, he withdrew from copying and resorted to landscape painting. After finishing high school, he moved to Tehran to major in painting at the Faculty of Fine Arts.

In 1967, having graduated from university, he displayed his artworks in a group show at Ghandriz Gallery for the first time. Between 1963 and 69, he collaborated with the Institute for the Intellectual Development of Children and Young Adults as an illustrator. The book, "The Crystal Flower and the Sun", illustrated by Nodjoumi was honored at the Bologna Children's Book Fair in Italy in 1969.

Being an excellent student during his university years, he managed to receive a scholarship. He wished to go to France to continue his studies, but the political and social condition of France at the time prevented him from going. When he was 28 years old, he traveled to the US and attended the City College of New York to further his education in painting. After completing his master's degree, Nodjoumi returned to Iran in 1974. Due to his political activities in the US, he was banned from teaching at university; however, he continued to display his artworks regularly in Iran until 1978. In 1980, he immigrated to the US forever. During the 80s, despite the common art style in the US being Minimalism, Nodjoumi continued doing figurative painting as his personal language took shape and was developed during those years.

Over the last decades, Nodjoumi has gained a large audience in Iran and other countries. Even though his work has changed drastically, being influenced by the art movements of the day, he has always painted his critical approach, challenging the connection between art and politics.

To depict what he has comprehended from the social and political incidents, he paints images of suited men and disintegrated portraits, disguised faces, clowns, and animals in various positions, adding geometrical patches and surfaces of color on the background of a natural landscape. He displays the human body in pieces or alters a section of the body parts. While not being properly connected and adjusted, the merging of different bodies seems to have given shape to those body parts or clothes. This form of depiction appeared for the first time in his artworks during the US – Iraq war.

Nikzad Nodjoumi's artworks have been featured in a myriad of solo and group shows, and museums worldwide, especially in the US. In 2003, Stefan Stux Gallery presented his work at the Armory Show. In 2008, he collaborated with Shirin Neshat on the curatorial project, "Ardeshir Mohassess: Art and Satire in Iran", held at the Asia Society Museum in New York.

In 2015, Nodjoumi's work was featured in the group show, "Bazm and Razm: Feast and Fight in Persian Art", held at the Metropolitan Museum of Art in New York, and in 2020, his work was presented by Aria Gallery at Teer Art. Some of his artworks are currently housed in well-established permanent collections of museums such as Met in New York, the British Museum in London, and Guggenheim in Abu Dhabi.