Known for sculptures and paintings created from disfigured human beings, animals, and mythic figures Bahman Mohasses, is one of the most prominent modern artists in Iran. ... Read full biography 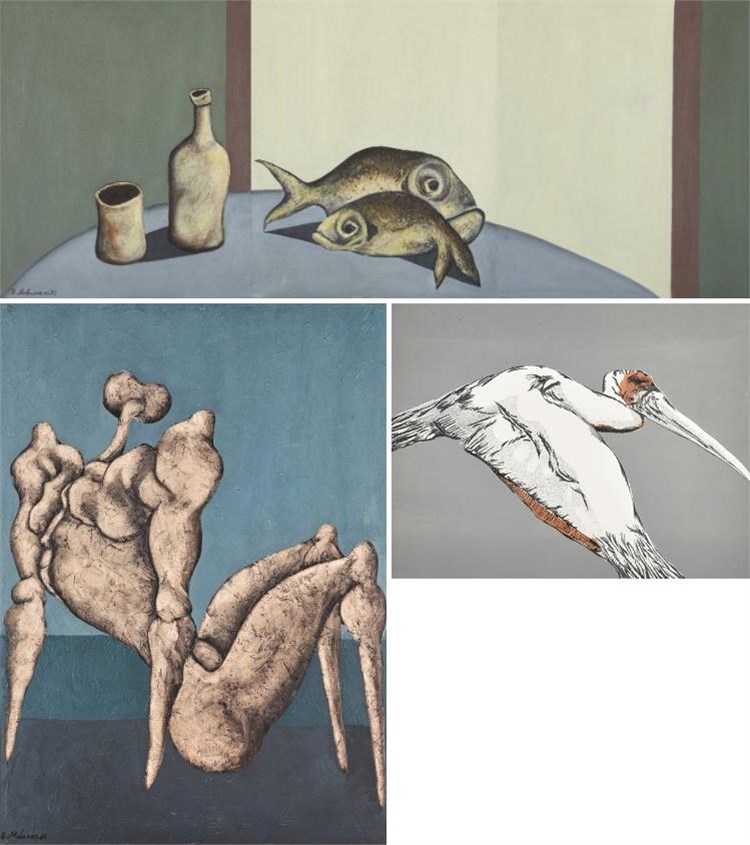 Known for sculptures and paintings created from disfigured human beings, animals, and mythic figures Bahman Mohasses (1931-2010), is one of the most prominent modern artists in Iran. Unlike most of his contemporary artists, Mohasses dissociated from Iranian culture and art. His inspiration from European modernism is noticeable in the form and content of his works; although he personalized them.

Mohasses had a mysterious character and his worldview was influenced by the intellectualism wave of the 1960s in France, and the Existentialism and the Nihilism approaches. To him, affliction, loneliness, and death were inseparable concepts from human beings. His critical approach and sad point of view on the universe and the human being, and also his personal loneliness are well reflected in his works. $$quote$$

Most of the Mohasses' oeuvres are combined, metamorphosed, and disfigured creatures with heavily-built bodies, inflated muscles, and empty eyes; he depicts birds, fish, and bottles as well. He was largely inspired by Greek myths, also minotaurs (half human-half animal creatures) play a principal role in his paintings and sculptures. Having no hands and feet, his monsters and faceless human beings are squirming or either depicted smirking and howling in a non-place and non-time, empty frame. He made a rough and flaky texture on the canvas and mostly used gray color combinations besides intense colors.

Mohasses learned painting from Habib Mohammadi in Rasht, then he came to Tehran and continued his studies at the Faculty of Fine Arts, but later he quitted the university. During all these years he had been encouraged by lots of pioneer artists and worked as an editor in Khoros Jangi magazine.  He was 23 when he went to Italy and continued studying in the Accademia di Belle Arti di Roma. He was already accustomed to many aspects of European culture but living and studying in Italy, largely influenced his attitude towards art. It was from this period that the main features of his artworks were formed.

In the 1340s, he decided to come back to Iran. He was a lead participant in the intellectual spirit of the era. Besides painting and sculpture, Mohasses translated master Italian and French writers' oeuvres; he experienced some activities in scene designing and theater directing as well. He exhibited his first series of faceless human beings in the Italian Cultural Association; depicting human beings and animals in such a way, became a principal feature in his artworks. In 1348, Mohasses immigrated to Italy and lived there until the end of his life.

Living in Italy was a self-imposed solitude for him. He became faithful to his personal style until the end of his life. This sad and critical attitude is visible even in his later collages. Lots of his public works got damaged over the years or unfortunately, he himself destroyed them before his death in 2010.

After Mohasses' death, a documentary called "Fifi Howls from Happiness" was published by Mitra Farahani, which showed the last year of his life. This documentary caused lots of people to be familiar with Mohasses' discriminable character and art and also become his fans. His works have been sold in lots of auctions and kept in lots of permanent collections of famous museums around the world, such as Tate Modern and the British Museum of London.