Ardeshir Mohassess was a careful observer of his time and an artist with a distinct and delicate look. He started the new Iranian caricature movement with a poignant critical view on social issues, deep-rooted customs, politics, and people’s behavior.  ... Read full biography 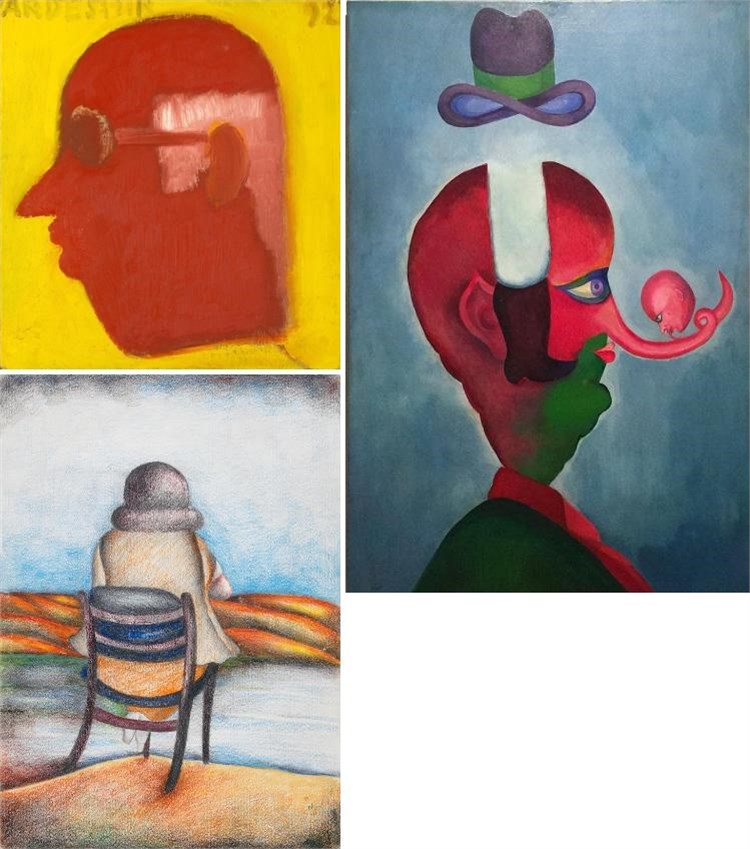 Some of his designs are more professional and some are amateurish. Ghahveh-Khaneh paintings and Qajar lithographic illustrations inspired him to portray his critical views and thoughts on social issues in a humorous language.

Ardeshir Mohassess (1938-2008) was a careful observer of his time and an artist with a distinct and delicate look. He started the new Iranian caricature movement with a poignant critical view on social issues, deep-rooted customs, politics, and people’s behavior.

Mohassess himself called his work "humorous designs". He put together some irrelevant and even contradictory elements to create a design that seemed humorous overall;  but his look was quite critical and sometimes cruel. He had a profound view of human issues and what he portrayed was a display of human concerns and problems throughout the world.

Some of his designs are more professional and some are amateurish. Ghahveh-Khaneh paintings and Qajar lithographic illustrations inspired him to portray his critical views and thoughts on social issues in a humorous language.

As a teenager, Mohassess became acquainted with the Iranian intellectual atmosphere by his mother, Sarvar Mahkameh Mohassess Lahijani, who was a poet. Since he was a child, he has been painting and was only thirteen years old when his works were published in Tofigh magazine. Ardeshir’s father was a prominent judge who died of cardiovascular disease. After his father's death, he went to Tehran at the age of twelve and graduated with a diploma in literature. At the same time, he got accepted at the Faculty of Fine Arts and the Faculty of Law of the University of Tehran. His choice was the Faculty of Law, as he had been involved in this field since childhood because of his father's job. He graduated from the university in 1962. He was also engaged in artwork and drew realistic paintings of nature during this period.

Mohassess turned to caricature in the late 1950s. When Ahmad Shamloo became the chief editor of "Ketab-e-Hafteh", he published Mohassess' designs in this magazine, and he became famous. After the closure of "Ketab-e-Hafteh", his designs, despite their bitter themes, were published in Kayhan newspaper for years. He held his first exhibition in 1967 in Qandriz Hall. These works were a collection of caricatures that he drew for journals like Negin, Ferdowsi, Kayhan English, and Ketab-e-Hafteh. His designs were later published as a book. In 1971, Sirous Tahbaz published the first collection of Ardeshir’s designs under the name of “Cactus” in the series of Zamaneh booklets.

Ardeshir Mohassess depicted poignant and rough themes through trembling chaotic lines, which are the main features of many of his works; but it was as if he was making fun of the themes. In 1974, he held his first solo show in New York at Columbia University. He immigrated to the United States in 1976, and his works were exhibited at the Art Basel. Mohassess' caricatures became known worldwide in the 1970s. He exhibited his works in numerous group and solo shows in France, the United States, and Iran.

Mohassess used colored pencil, watercolor, and oil paints to create his works, but a significant number of his works are designs that he made with pen and ink on paper. Some of his designs are more professional and some are amateurish. Ghahveh-Khaneh paintings and Qajar lithographic illustrations inspired him to portray his critical views and thoughts on social issues in a humorous language. With this ironic look, he referred to the pictorial culture of the Qajar period and introduced a new popular culture to the modern Iranian art.

Mohassess continued his critical attitude and graphical humor throughout his career, and came up with a bitter and biting language that criticized power and political issues anywhere in the world. In 1988, he was selected by the Japanese magazine “Idea” as the most outstanding living cartoonist-caricaturist in the world. His caricatures have been published for years alongside political and social articles in prestigious American publications such as The New York Times, The Washington Post and The New Yorker, and now more than 80 of his works are kept in the National Library of America.

Mohassess' works were exhibited in Iran for the first time in thirty years in 2006. The show, entitled "After Three Decades", was held at Homa Gallery. After that, in 2007, another solo show called "Ardeshirestan" was held at Homa Gallery, which was the last show of Mohassess' works in Iran during his lifetime. He continued to create caricatures for the rest of his life.

Ardeshir Mohassess had a shy reserved personality. He was the cousin of the great painter and sculptor Bahman Mohassess and had the same sensitive and introverted spirit. In 1972, Bahman Maghsoudlou made a documentary called "Ardeshir Mohassess and His Caricatures" which showed a part of his activity. Mohassess did not appear in front of any camera after this film and did not interview any media. After Mohassess passed away in 2008, Maghsoudlou decided to complete this documentary. He interviewed people like Javad Mojabi, Reza Baraheni, Shirin Neshat, and Nikzad Nojomi about Mohassess and his works. After four years of research, interview, and editing, the documentary film “Ardeshir Mohassess: The Rebellious Artist” finished in 2013. This documentary narrates the subtle and unseen points of the artist's life from the perspective of his friends and critics.